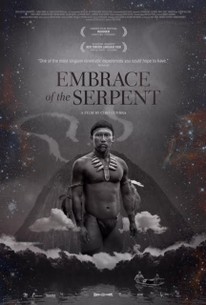 Critics Consensus: As rich visually as it is thematically, Embrace of the Serpent offers a feast of the senses for film fans seeking a dose of bracing originality.

Critics Consensus: As rich visually as it is thematically, Embrace of the Serpent offers a feast of the senses for film fans seeking a dose of bracing originality.

Critic Consensus: As rich visually as it is thematically, Embrace of the Serpent offers a feast of the senses for film fans seeking a dose of bracing originality.

Embrace of the Serpent features the encounter, apparent betrayal and finally life-affirming friendship between an Amazonian shaman (the last survivor of his people) and two foreign scientists.

Embrace of the Serpent is a mystical movie missile from Colombia. It's ballistic, balletic, sometimes brilliant.

Embrace of the Serpent is a breathtakingly gorgeous Oscar-nominated drama that caresses your eyes with its visuals as it bangs you over the head with its message.

Shot in luminous black-and-white in the Colombian Amazon, Embrace of the Serpent looks like a series of animated photographs torn from the colonial explorers' journals that inspired it.

It is surely one of the most beautiful films in a long time.

While Guerra clearly owes a debt to Herzog and Coppola, he blazes his own trail. I can't wait to take this trip again.

Young Colombian director Guerra's visionary and wildly ambitious film seems like a movie from another era.

The journeys of two explorers, four generations apart, into the Colombian Amazon are beautiful, frightful, and at their wildest, half-crazed.

It's hard to argue with an artistic vision as utterly distinctive as Guerra's. Even when his story stutters, it's hard not to be seduced by the sheer immersion of his filmmaking.

A film that shoots for the moon and lands with ease, grace and nuance; a landing so perfect it infuses the viewer with a love of cinema and its possibilities.

It is a glorious excursion, full of beauty and wonder, but it leaves its viewers more unsettled than before.

It almost feels like a religious experience, watching a movie that's as beautifully alien and removed from convention as Embrace of the Serpent.

The time is our best card and our worst at the same time. Time is like the embrace of the serpent: it is warm but, at the same time, is really suffocating. Enjoy the marvellous hug. [Full review in Spansih]

To quote Indiana Jones, "Snakes. Why did it have to be snakes?" Well, they are connected to the creation story of the natives who live along the Amazon river. The subplots about missionaries and Europeans exploiting the natural resources such as rubber trees gives good context to the story. The locations around Columbia are so beautiful in black and white. The plot jumps forward and back in time as young Karamakate (Nilbio Torres) and old Karamakate (Antonio Bolivar) each guide a European scientist through the winding river and forests. Karamakate is alone in the world, a warrior survivor with a powerful memory. The largest portion of the film takes place in 1909 when sick scientist Theo (Jan Bijvoet) is keeping a diary and hoping to get back to his colleagues in "civilization" for medical aid. Secondarily, in 1940 another scientist named Evan (Brionne Davis) arrives with a tape recorder tracing the journey that Theo took based on his diary. Both Europeans learn much from Karamakate although he never grows to trust either of them very much. This adventure explores life and our place in the world through gorgeous photography, the evil of colonialism, and a hallucinatory sacred plant.

"Embrace of the Serpent" is an amazing exercise in psychedelia. It concerns two generations of German scientists who traverse the Amazonian wilderness with the same medicine man. I can't fully say I've seen the film (twice) though because I can't find decent enough subtitles for it. The files that I have found for it are extremely poorly translated, and I don't think I can rightly surmise the profundity of it without seeing an officially sanctioned DVD or Blu-ray copy. Anyway, it is beautifully shot in black and white, then for the psychedelic climax it switches to color. It is on the level with Jodorowsky's "The Holy Mountain" once it reaches that point. It is an absolutely beautiful and visceral experience, and you should watch it in the highest definition you possibly can.

Ciro Guerra creates a powerful film of transcendent beauty about the arrogance of the Western white man in relation to Native American cultures. Full review on filmotrope. com

THE HEART OF STARKNESS - My Review of EMBRACE OF THE SERPENT (4 Stars) Colombia is in the Foreign Language Film Oscar race this year with a real stunner, EMBRACE OF THE SERPENT, a blazingly original, heartbreaking, meditative, and strange journey into the heart and soul of the Amazonian rain forest. Writer/director Ciro Guerra has based his film on the diaries of its two real-life foreign scientists, who embarked on similar yet decades-apart journeys to find the yakruna, a plant revered for its healing powers. Guiding the men in 1907 and many years later (the time period is best left unsaid here for the terrific third act reveal) is a last-of-his-tribe shaman named Karamakate (played beautifully by two dynamic actors at their different ages, Nilbio Torres and Antonio Salvador). In the earlier storyline, Theo (a jittery, empathetic Jan Bijvoet) faces death unless his traveling companion, a recently freed slave Manduca (Yauenkü Migue), can convince Kaiamakate to lead them to the yakruna. Wary of the white man, Karamakate sees an imperialist destroyer of the land he holds so dear. To him, white men don't adhere to the rules created to sustain plant and animal life. They've already sent rubber barons and missionaries to destroy his way of life. Regardless, Karamakate possesses humanity and empathizes with the sickly man. Intercut with this harrowing adventure is a quiet, but no less menacing trip taken by Evan (Brionne Davis*), an American who also enlists Karamakate for similar reasons, rowing down the same river and visiting the same places as his predecessor. Evan's motivations become a quiet, stunning mystery, made infinitely more complex by Davis and Migue's subtle interactions. Not only is the inevitable reveal a true surprise, but the aftermath is just as profound and unexpected. EMBRACE OF THE SERPENT is a somber, heartbreaking look at the destruction of one of the world's greatest resources told from the point of view of its indigenous people. Despite having two white co-stars, it's Karamakate's character who imparts most of the information and who ably personifies the tragic losses before him. Part primal scream, part didactic (sometimes a little too heavy handed) lesson in ecological genocide, the script nevertheless earns its outrage, especially in a highly disturbing sequence involving a Missionary Priest and his young minions. This is APOCALYPSE NOW/HEART OF DARKNESS territory as our journeymen peel back the onion layers of hidden civilizations to find "the horror, the horror!" Guerra's film is emboldened by relative newcomer, David Gallego's gorgeous black and white cinematography. Whether we're given majestic tableaus of the scenery or thrust behind our protagonists, stalking them with glorious steadicam work through the thick forest, the filmmakers create an immersive experience. This is a slow but highly involving film, unfolding with simmering tensions, leading towards a hallucinatory sequence which would not feel out of place in 2001: A SPACE ODYSSEY. It asks tough questions. Can those who suffer the most from western imperialism still find it in their hearts to empathize with their destroyers? Much like the Two Spirit philosophy of Native Americans, the film emphasizes the different sides of the human personality, the notion that we all have a copy of ourselves out there which heavily influences who we are and how we're perceived by the rest of the world. Our journeying scientists, the film seems to say, are two sides of the same coin. They both push the rock up the hill, one perhaps atoning for the other, or one could interpret it in far less forgivable terms. Either way, we're left with a stunning shot of an isolated man surrounded by the great beauty of nature, either on the precipice of righting a wrong or doing more harm. History has told us which way this has gone, but this thoughtful, elegiac film may change hearts and minds. *Full disclosure, Brionne Davis is a friend of mine. I probably would not have reviewed the film had I hated it. Luckily, it's a pretty great movie. Whew!