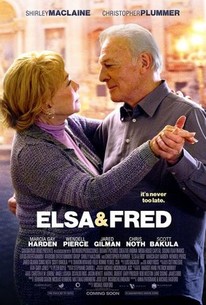 "Elsa and Fred" is the story of two people who, at the end of the road, discover that it's never too late to love and make dreams come true. Elsa has lived for the past 60 years dreaming of a moment that Fellini had already envisaged: the scene in 'La Dolce Vita' at the Fontana di Trevi. The same scene without Anita Ekberg in it, but with Elsa instead. Without Marcello Mastroiani but with that love that took so long to arrive. Fred is a bit younger than Elsa and has always been a good man who did everything he was supposed to do. After losing his wife, he feels disturbed and confused and his daughter decides that it would be best if he moves into a smaller apartment where he ends meeting Elsa. (C) Official Site

Haylie Creppel
as Girl with Ball

Brady Yarborough
as Child In Park

Jesse Yarborough
as Pedestrian
View All

The film is so lightweight, it almost doesn't exist.

Unlike so many American remakes of foreign films, this reboot improves on the original, mostly because it takes full advantage of the star power of its English-speaking cast.

This movie is so tone-deaf that it tries to wring charm from questionable stereotypes about senior citizens and minorities.

A not-terrific, not-terrible romantic comedy that owes most of its charm to its two stars.

A bland and formulaic tale of two senior citizens who discover that it's never too late to fall in love - which may well be true, but doesn't keep this rickety recycling of a 2005 Spanish-Argentinean comedy from feeling long past its sell-by date.

The movie's too-cute concept yields more rewards than you might reasonably expect.

A distracting cocktail of contrived ideas and easy resolutions.

It stars Shirley MacLaine and Christopher Plummer as a pair of neighbouring oldies, struggling to breathe life into a staid scenario with rote characters, but the duo's undeniable quality manages to warm things up.

This story of love in the autumn of life is not without its charms, though it takes a crisp and well-judged performance from Plummer to balance MacLaine's shrill extravagance.

Elsa & Fred is a sweet story that reminds you that it is never too late to make your dreams come true.

Considering the CVs of all involved (not least Radford, who was Oscar-nominated for Il Postino) this remains little more than a gooey footnote.

Nice movie about an older couple. I didn't really expect to get into it, but it was actually really well done and Shirley MacLaine is still so beautiful to watch onscreen. I didn't realize until I looked it up that it's a remake of a foreign film, actually that made sense in how this one plays out. It wasn't your standard American film at all. I dare say the original is better (aren't they always?), but I haven't seen it, so I can only rate this as I find it. Quite moving in places. I loved the scene at the end where Elsa finally visits Rome, but it was sad too.

I hated Elsa.... she was very immoral in my opinion. She made Fred happy and brought him out of his shell so that was the only good part of the movie.