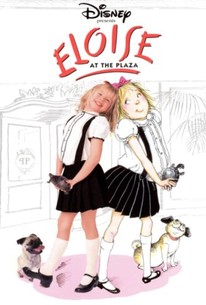 Eloise at the Plaza Photos

Created by author/entertainer Kay Thompson in 1955, precocious six-year-old Eloise, who lived in the Plaza Hotel with her long-suffering nanny, her dog Weenie, and her turtle Skipperdee, was the heroine of several delightful children's books written by Thompson and whimsically illustrated by Hilary Knight. The charm of the "Eloise" books has proven elusive whenever the property is adapted for another media, as witness a disastrous musical version which aired live on Playhouse 90 in 1956. On this occasion, Eloise came off as a spoiled obstreperous brat, which was as much the fault of the child actress cast in the role (Evelyn Rudie) as the adapters. Disney decided to give little Eloise another chance 47 years later with the location-filmed Eloise at the Plaza, a two-hour movie presentation of ABC's The Wonderful World of Disney anthology. This time around, Sofia Vassilieva played the title role, with Julie Andrews as Eloise's nanny (something of a full-circle for Andrews, who won an Oscar for her portrayal of a rather different nanny in the 1964 Disney theatrical feature Mary Poppins). The plot finds Eloise insisting upon attending a debutante ball at the Plaza and further conniving to have a runaway foreign prince (Denis Akiyama) -- who isn't much older than she is -- as her escort. Our heroine also mends fences between a reluctant teenage deb and the girl's pushy mother. Jeffrey Tambor is typecast as the Plaza's supercilious concierge Mr. Salomone, whose dithering efforts to keep Eloise from nosing into other people's business avail him not one bit. Hilary Knight appears in a cameo role as himself. Eloise at the Plaza first aired April 27, 2003.

Denis Akiyama
as Prince of Kushin

Araxi Arslanian
as Head of Housekeeping

Victor A. Young
as Peabody

Hilary Knight
as Himself

Jonas Chernick
as Philip
View All

Critic Reviews for Eloise at the Plaza

Audience Reviews for Eloise at the Plaza

Cute movie about a girl who hardly sees her parents and who lives in a Hotel. She gets into a lot of mischief. Cute movie for kids. The little girl named Sofia Vassilieva really resembles the little girl on the books cover. Entertaining movie for the kids.

Eloise at the Plaza Quotes