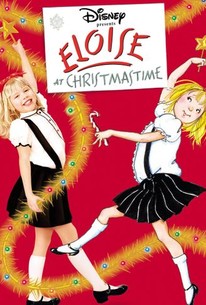 The precocious six-year-old Manhattanite of Kay Thompson's beloved Eloise books gets into the holiday spirit while playing cupid in this made-for-TV comedy. Eloise (Sofia Vassilieva) resides at the Plaza Hotel with her parents, and like much of the hotel staff, she's excited about the upcoming marriage of Rachel Peabody (Sarah Topham), the daughter of the hotel's owner, to handsome Brooks Oliver (Rick Roberts). However, Eloise learns that Brooks' motivations for marrying Rachel are not sincere, and so the youngster tries to sway Rachel away from her fiancé and toward Bill (Gavin Creel), a good-hearted waiter in the hotel's restaurant. Eloise at Christmastime also features Julie Andrews, Jeffrey Tambor, and Christine Baranski.

Victor A. Young
as Mr. Peabody

Graham Harley
as Walter the Concierge
View All

Critic Reviews for Eloise at Christmastime

...a marked improvement over its predecessor.

Audience Reviews for Eloise at Christmastime

An annoying six year old girl farts about a hotel sticking her nose in everyone's business. She is best friends with a weird, older waiter guy who unfortunately does not turn out to be a child murderer in a third act twist. All fluffy and lovely it also has Julie Andrews doing one of the worst "Cor Blimey" cockney accents ever seen on film.