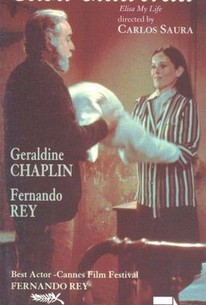 On the heels of his award-winning Cria cuevos (Raise Ravens), Spanish filmmaker Carlos Saura dashed off the muted psychological drama Elisa, My Love. Geraldine Chaplin stars as Elisa, who after an absence of 20 years is reunited with her father, Fernando Rey (in a superb performance, which won him the Cannes Film Festival "Best Actor" prize). Having just divested herself of an unhappy marriage, Elisa hopes to heal old, long-standing family wounds. Inasmuch as Saura thrives on exploring "unspeakable" subjects in his films, one can gather that the relationship between Elisa and her father may be far more complex than it seems at first. Elisa, Vida Mia was released in English-speaking countries as Elisa, My Love. ~ Hal Erickson, Rovi

The main reasons to see the film are the two leading performances. Mr. Rey is always an interesting presence, and Miss Chaplin, as in all of her Saura films, reveals qualities of feeling, control and beauty that no other directors have ever found.

The story, which begins with an affectionate and almost routine visit, becomes in the end a passionate cry, in sonorous solitude, a silent portrait of one of the key moments of human pain. [Full review in Spanish]

There are no featured reviews for Elisa, My Love (Elisa, vida mia) at this time.