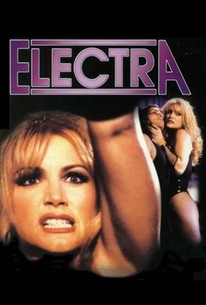 Marcus Roach (Sten Eirik) is a wealthy industrialist who was left paralyzed after an industrial accident. He's after a regeneration/strength serum held by inventor's son Billy Duncan (Joe Tab), who guards it with his life. The chemical is incapable of being broken-down, so killing Billy won't help, but the essence of the serum can be transmitted sexually. So, says Roach, "we have the key. All we need is the right keyhole". A-hem! Billy's been guarding his virginity from his cute girlfriend, Mary Anne (Kathy Griffin), and his lusty stepmother, Lorna (Shannon Tweed), so he won't make them superwomen. Roach realizes he's found the right keyholes, and has his super-strippers (who dress as cheerleaders at one point) kidnap the women. Mary Anne is put in a dungeon and the hypnotized Lorna has sex with Billy until he spills his super-seed, turning her into a fanged, electricity-shooting hellcat. Mary Anne pops the super-pill and rips a stripper's heart out, throwing it into another stripper's mouth, eventually battling Electra/Lorna while Roach tries to kill Billy with a flame-throwing wheelchair. Exploding heads and people blowing apart are the fitting climax to this jaw-dropping spectacle.

Daniel Levinson
as Bug No. 1

Dirk K. Heinze
as Guard No. 3
View All

There are no critic reviews yet for Electra. Keep checking Rotten Tomatoes for updates!

There are no featured audience reviews yet. Click the link below to see what others say about Electra!