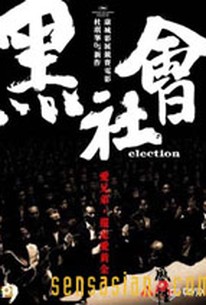 A crime family flirts with democracy, leading to a fierce gangland battle in this stylish crime drama from Hong Kong director Johnnie To. With over 50,000 members, the Wo Shing Society is one of the largest and most powerful Triads in Hong Kong, and when the leadership committee needs a new head man, they decide to put the matter to a vote of their underlings. The two candidates are Lok (Simon Yam), a cool leader who doesn't rattle easily, and Big D (Tony Leung Kar-Fai), who has a short temper and is prone to violence. After Uncle Weng (Wong Tin-lam), an elderly and well-regarded member of the Triad, gives Lok his endorsement, he wins by a landslide, which does not sit well with Big D's uncertain temper. A ceremonial walking stick which is given to the Wo Shing Society's elected leader has disappeared, and Big D will stop at nothing to make sure it stays out of Lok's hands; meanwhile, the Hong Kong police are determined to bring down the Triad, and Big D ends up behind bars. The Wo Shing Society falls into chaos as in-fighting threatens to tear the Triad apart before the walking stick can be returned and Lok can be inaugurated as their new chief. Election (aka Hak Sewui) was a major box office success in Asia, and the story continued the following year in Election 2 (aka Hak se wui yi wo wai kwai).

Siu-Fai Cheung
as Mr. So

Toronto Wrapup: Senh, Jen And Tim’s Raves And Rants From The Festival
TORONTO: "Away From Her," "The Prisoner," "El Cantante," And More Purchased at Fest

The film's violence erupts in rare, staccato bursts, all the more horrifying for coming out of nowhere.

Election feels routine at times, though less formulaic than other genre exercises from Hong Kong. The depiction of crime customs is sociologically detailed.

[Director To's] talent for documentary-style realism and navigating complex political systems sets him apart, though his nationalism puts him squarely in the mainstream.

Ultimately, Election and Triad Election -- which benefit from being seen back to back -- play like a mature reevaluation of [Johnnie] To's long-standing talent for splashy, eye-popping violence.

Nobody familiar with [director] To will be surprised by the way he presents stylish violence in innovative and humorous ways.

The film's main drive involves plotting and scheming rather than outright violence, though -- unlike the sequel -- the basic good guy-bad guy conflict is pretty standard.

Some real genius and understated power . . . transcends its genre and turns the venally criminal into the profoundly human.

Reveals [director] To as a master of lean, close-quarters action.

has more hits than misses

To's double shot is a landmark work for HK cinema.

It's easy to see why a sequel was quickly cranked out.

The time has come for a Triad organisation to elect a new chairman, but the losing contender rejects the outcome and threatens to break away and form a new gang. Johnnie To's Election has been described as "the Asian Godfather", but I personally felt it had more of a Goodfellas vibe about it, particularly the grimly realistic violence that is made all the more so by the fact that the weapon of choice of these gangsters is the machete. The crux of the story revolves around a race for a ceremonial sceptre that is the traditional symbol of power for the organisation, but this format made the film feel like a 90 minute relay race as one character hands the "baton" to the next after occupying the screen for an all too brief length of time; in all there are nine characters vying for your attention (not even including the "bad" guys) which means few have any real chance to make any impact. Just when you think the set up is complete and the story is about to begin, the credits start rolling. In this way the film reminded me of the original X-Men film as it suffers from the same problem of introducing too many characters too quickly leaving little time for plot or characterisation of any depth. Having said that, it looks fantastic without losing any of its inherent grittiness and it's a solid foundation for the superior sequel Triad Election.

a really interesting look inside the hong kong triads

This is really the only movie that could stand up to THE GODFATHER as a true gangster movie. Its outright brilliant. Perfectly executed. Vicious. And for all hardcore thrill fans and those that loved the Godfather, you will be hooked!!

Election takes us into the world of the Triads. Every two years, a new chairman is voted to head the Wo Sing Triad. But this time, there are two contenders: the violent, energetic and dangerous Big D, (Tony Leung) who is admired for his tenacity and ability to earn money, but his short temper and inability for paitence leaves him undesired by the more level headed "Uncles" of the groups. His opposite is the calm, intelligent and equally dangerous Lok (Simon Yam), a patient, cunning gang leader who shows and equally earns respect from his peers. When Lok and Big D clash, the Wo Shing Triad is about to explode with infighting, unless Lok can negotiate a truce between the rival groups, and also handle the police and other competitors at the same time.

This is brilliantly shot - perfect. The direction = fabulous. Johnnie To should be helmed directing top drawer Hollywood or Indie films, but the censors and tight ass producers will probably restrict his talents and skills, so he's better off in Hong Kong. The music -perfect match. Just like the Godfather had its theme, the score for Election is unique and well composed, the strings played beautifully, giving a melancholic sound in a smooth beat, which is flawless and suits the movie like the proverbial glove. The cast - well, too bad they arent the superb cast from The GODFATHER. But they are second to none. Most people are familiar with Jackie and Jet and Bruce. The cast is really the top gun veterans in Hong Kong outside of the previous 3, Simon Yam and Louis Koo being my personal favourites, usually underrated and left in the background when being cast in other movies with the international stars. Tony Leung should be no stranger to international films, his most recent popular movie to the general public being Hero, with Jet Li.

The rest of the characters are well developed and played out so well, its like really feeling that these guys are he real deal, the same feeling you got when you "connected" with the Corleone Family.


This is a must see for HK fans and Gangster movie lovers! Or anyone who respects top quality films.

And it can prove it too, being a selection at the 2006 Cannes Film Festival, Toronto, New York, Melbourne, Stockholm and many other Film festivals, broke the box office in Hong Kong, which was surprising for an R18+ movie in HK.

watch it yourself, it kicks ass! Literally.

Being a Johnnie To fan, I expect nothing but great films from him. Honestly, this is a disappointing film from Mr. To, but it is safe to say that even low Johnnie To films turn out much better than many other films out there.

The story is everything you'd expect from a Johnnie To film. Gangs, cops, robbers, etc. Doesn't sound too interesting right? Well, once again the great cinematography and characters give this film some depth and make it a worthwhile watch. The beginning of this film is somewhat of a disappointment. There is a ton of character introductions and the premise of the story is unfolded. While it isn't all that bad, it just feels like you're average cops and gangsters film. The great aspects of a Johnnie To film don't kick in until about the 40 minute mark. From this point on the Johnnie To feeling sinks in and the film becomes much more enjoyable. Nice character transitions and some nice suspense keeps the movie interesting. Let me also mention that the ending is another let down. It feels lacking at places.

The various characters in this film are played by the usual cast of characters. Simon Yam, Tony Leung Kai Fa, Nick Cheung, and Lam Suet should not be surprising to see. Maggie Shiu shows up again, but she is totally underused. Other than that, the acting is great.

Johnnie To can produce some nice shootouts and in a film involving gangsters you would expect to get some masterpieces. Unfortunately you don't. In fact, this film really lacks in action. That's not to say that this film is boring, but a little action couldn't hurt.

If you are a fan of Johnnie To, give this a watch. Just don't expect a masterpiece.