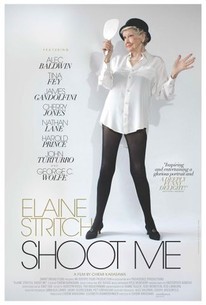 Critics Consensus: Brutally honest and utterly compelling, Elaine Stritch: Shoot Me offers a riveting, vanity-free portrait of its legendary subject while offering a few essential truths about the human condition.

Critics Consensus: Brutally honest and utterly compelling, Elaine Stritch: Shoot Me offers a riveting, vanity-free portrait of its legendary subject while offering a few essential truths about the human condition.

Critic Consensus: Brutally honest and utterly compelling, Elaine Stritch: Shoot Me offers a riveting, vanity-free portrait of its legendary subject while offering a few essential truths about the human condition.

Now in her late 80s, Broadway legend Elaine Stritch remains as ferociously funny as ever. In this bold, hilarious and poignant portrait, the uncompromising Tony and Emmy Award-winner is revealed both on and off stage. Candid reflections about her life are punctuated with words from friends (including James Gandolfini, Tina Fey, John Turturro, Hal Prince, George C. Wolfe, Nathan Lane and Cherry Jones) and archival footage that showcases some of the great moments from her career. Whether dominating the stage, tormenting Alec Baldwin on the set of 30 Rock, or sharing her struggles with aging, diabetes and alcoholism, Elaine Stritch: Shoot Me reaches beyond the icon's brassy exterior and reveals an inspiring portrait of a complex woman and artist. (c) IFC

There's something indomitable about her will to perform, and insecurity has been part of her experience for decades, it's clear.

Chiemi Karasawa deserves all the credit in the world for the intimate and hilarious portrait that is Elaine Stritch: Shoot Me, a sparkling cocktail of music and memoir. On the other hand, she didn't exactly have to drag her subject out of her shell.

[A] feisty portrait of the musical-theater legend.

Elaine Stritch's strength, along with the film's, comes from her honesty. She is herself, even when - maybe especially when - she knows she's being watched.

Really, the experience of "Elaine Stritch: Shoot Me" is the experience of being in Stritch's company for 80 minutes, and that's fine. Still I doubt anyone will walk out of this film wishing it were 10 minutes longer.

A delight in that we're able to spend time with as rare a creature as Elaine Stritch, but the film's human elements elevate it to greater heights.

In the same way that disabled and older people shouldn't be called "inspiring" just for living their lives... the film shows us that the effects of aging for [Elaine] Stritch aren't tragic but just inconveniences and obstacles for her to work around.

What becomes a legend most? In Elaine Stritch's case, it's this riveting, unvarnished documentary portrait of the lioness in winter.

Ultimately, Elaine Stritch: Shoot Me makes you root for her even when you've had your fill of her.

For someone who made her Broadway debut 68 years ago, Elaine Stritch is still quite the firecracker.

As we see Stritch carry on, still performing into her eighties, battling the physical and mental ravages of time, it's obvious she was no sissy.

"Elaine Stritch: Shoot Me" is a cautionary tale about meeting one's hero lest they tell you about the time they had their first orgasm, while acting in 'Who's Afraid of Virginia Woolf?' on stage.(John Turturro looks stunned but I'm pretty sure he's okay.) That kind of tells you the kind of person Elaine Stritch is, aside from being a legendary actor and singer who is a long, long way from being a convent girl in the suburbs of Detroit. The documentary follows her around as she quickly approaches her 87th birthday while looking back periodically and fearing the future, as she copes with the infirmities of old age, along with diabetes and alcoholism. However, that does not stop her from working or from being as feisty or funny as ever.