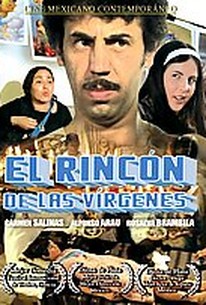 In rural Mexico, during the silent-film era, people who could read were delegated to narrate the films' story cards. In this film, Lucas Lucatero not only performed that chore, but traveled around with a charismatic peddler, Anacieto Morones (Emilio Fernandes) who at some point began to pass himself off as a miracle worker. The film begins as a group of women land on Lucas' doorstep requesting his help in having the now-deceased wonder-worker considered for sainthood by the Roman Catholic church. Flashbacks tell Anacieto's true story, which is as far from pious notions of sainthood as is possible, for his miraculous accomplishments were mostly of a sexual nature. ~ Clarke Fountain, Rovi

There are no critic reviews yet for Nest of Virgins (el rincón de las vírgenes). Keep checking Rotten Tomatoes for updates!

There are no featured reviews for Nest of Virgins (el rincón de las vírgenes) at this time.