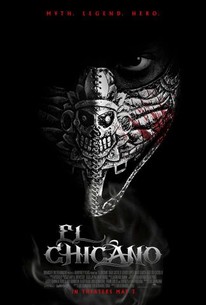 Critics Consensus: El Chicano represents a step forward for representation in superhero cinema -- unfortunately, its clichéd story is nothing more than ordinary.

Critics Consensus: El Chicano represents a step forward for representation in superhero cinema -- unfortunately, its clichéd story is nothing more than ordinary.

Critic Consensus: El Chicano represents a step forward for representation in superhero cinema -- unfortunately, its clichéd story is nothing more than ordinary.

When L.A.P.D. Detective Diego Hernandez is assigned a career-making case investigating a vicious cartel, he uncovers links to his brother's supposed suicide and a turf battle that's about to swallow his neighborhood. Torn between playing by the book and seeking justice, he resurrects the masked street legend El Chicano. Now, out to take down his childhood buddy turned gang boss, he sets off a bloody war to defend his city and avenge his brother's murder

It does have some riveting moments and some very strong acting.

Ben Hernandez Bray's "El Chicano" seldom amounts to anything more than a crude prototype for the kind of Latinx-driven superhero movies that Marvel and DC should already be making by now.

This is a nasty, brutal little movie, more in the vein of a grindhouse revenge flick than anything else. But it's effectively done...

[El Chicano] functions most effectively when it explores the dangers of moral ambiguity.

Like in this year's remake of Miss Bala, the Mexicans in this movie are the bad guys, the drug-running cartel members ruining it for the rest of us in the United States.

The problem here isn't the fairly apparent budgetary limits - it's the limitations of style and imagination.

The first all-Latino superhero movie is unfortunately an uninspiring B movie.

[Director Ben Hernandez] Bray wants the film to be another straightforward superhero empowerment narrative. But he keeps stumbling onto complicated questions he doesn't want to acknowledge or resolve.

When your lead actor doesn't seem to be having any fun in an action movie, there's not much left for audiences to cling to. Genre fans will need to look elsewhere for their gunslinger fix.

El Chicano isn't that great of a movie, but it's ambitious and I am glad that it exists because it means we're walking toward more movies that star members of the Latinx community.

There are no featured audience reviews yet. Click the link below to see what others say about El Chicano!