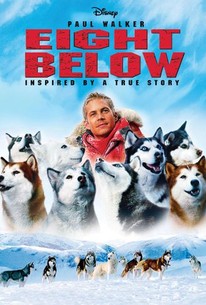 Critics Consensus: Featuring a stellar cast of marooned mutts, who deftly display emotion, tenderness, loyalty and resolve, Eight Below is a heartwarming and exhilarating adventure film.

Critics Consensus: Featuring a stellar cast of marooned mutts, who deftly display emotion, tenderness, loyalty and resolve, Eight Below is a heartwarming and exhilarating adventure film.

Critic Consensus: Featuring a stellar cast of marooned mutts, who deftly display emotion, tenderness, loyalty and resolve, Eight Below is a heartwarming and exhilarating adventure film.

In the extreme wilderness of Antarctica, three members of a scientific expedition -- Jerry Shepard, his best friend, Cooper and a rugged American geologist -- are forced to leave behind their team of beloved sled dogs due to a sudden accident and perilous weather conditions in Antarctica. During the harsh, Antarctic winter, the dogs must struggle for survival alone in the intense frozen wilderness for more than six months.

Daniel Bacon
as Bureaucrat No. 2

Laara Sadiq
as Bureaucrat No. 3

Dexter Bell
as Worker No. 1

A. James Ryan
as Shorty

Alexios A. Panou
as Howard

News & Interviews for Eight Below

View All Eight Below News

Critic Reviews for Eight Below

Live-action animal adventures have always been a Disney specialty, and this one has a pretty compelling plot.

It's heartwarming, occasionally exciting, and some of the cinematography is exemplary.

There are times when resisting the Disney line just isn't worth the effort.

After two hours in Walker's slack-jawed company, you feel like you've just gone through the Antarctic winter yourself.

The dogs take the biscuit in Eight Below, an enthralling fact-based tale of man's best friend struggling to survive a harsh Antarctic winter.

Eight Below runs two hours and would have benefited from losing 30 minutes of that -- all of it from Jerry's (Paul Walker) protracted quest. The other human actors are simply types.

This surprisingly impressive adventure tale from director Frank Marshall escaped being Disneyfied, meaning that the animals are heroic, wondrous and believable, but not cute.

The Alaskan Huskies of Eight Below are both better-looking and better performers than their human counterparts, and their vigilant scenes of solo survival on an Antarctic outpost make for the highlight of this otherwise predictable rescue mission.

Kids will be enraptured (and a tad frightened) and all but the stoniest-hearted adults will join them for a bit of a cry.

At first sight a fun but slightly sappy man-and-his-dogs story, Eight Below quickly evolves into a well-crafted wilderness adventure reminiscent of Disney's heyday.

Audience Reviews for Eight Below

If only those actors could act, we'd have ourselves a gold winner.

Eight below is an emotional and good movie. The problem is that they say it was based on a true story, when in reality the dogs were lost they have no idea what happened to the dogs. It was depressing at times but could also be kind and good hearted. Its worth a watch but only once or twice.

Paul Walker makes this movie even better than it should have been! I did not expect this movie to be as good as it was, but it was fantastic. Paul Walker pulls off an amazing performance here, and the story is breathtaking.