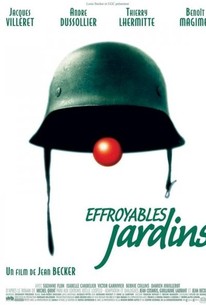 Jean Becker's Effroyables Jardins (Strange Gardens) is a tale of survival during WWII. At the beginning of the 1960s, French teenager Lucien (Damien Jouilleot) is deeply embarrassed by the quirky behavior of his father Jacques (Jacques Villeret), as well as Jacques' ongoing performances as a clown at public celebrations. Lucien's mother, Louise (Isabelle Candelier), does nothing to stop her husband. Jacques' friend Andre (Andre Dussollier) tells Lucien about Jacques' experience during the war, a time when both Jacques and Andre were in love with Louise. After doing their part for the French resistance, Jacques and Andre are captured by the Nazis and informed that they may well be executed in less than twenty-four hours. Their unusual relationship with a Nazi guard makes all the difference, and reveals to Lucien the motivation behind his father's actions.

There are no critic reviews yet for Effroyables jardins. Keep checking Rotten Tomatoes for updates!

There are no featured reviews for Effroyables jardins at this time.