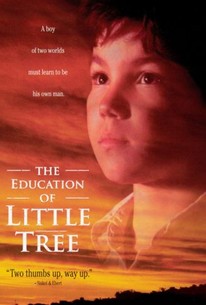 The Education of Little Tree Photos

Richard Friedenberg scripted and made his directorial debut with this adaptation of Forrest Carter's 1992 award-winning coming-of-age novel detailing the Depression-era boyhood of an orphaned Cherokee, eight-year-old Little Tree (Joseph Ashton). Raised and tutored by his grandparents (Tantoo Cardinal, James Cromwell) in the Smokey Mountains of the 1930s, Little Tree encounters difficulties after authorities force him to attend the Notched Gap Indian School. Friedenberg later received an Oscar nomination for his A River Runs Through It screenplay.

Richard Jutras
as Indian
View All

Critic Reviews for The Education of Little Tree

Earnest but evocative, and in moments touching, chronicle of the turbulent childhood of a Cherokee orphan during the Depression.

The Education of Little Tree is another fine family movie that will no doubt be ignored by the fine families of America.

Builds an honest, natural poignance that would not have been achieved through hollow melodramatics.

Pays homage to the spiritual elders who help us to find our place in the world.

The characters are complex enough to pose important questions, yet the themes are sufficiently straightforward for youngsters to learn and enjoy.

The rarest of kids' movies, the serious drama, where it is people and not some cute animals that are in grave danger.

The film spends far too much time around the moonshine still and hypocritical local church at the cost of other, more interesting lessons.

Audience Reviews for The Education of Little Tree

The film takes a historical look at what Charaokee Indians had went through during some of there early struggle (through stories) and there continuing struggle well into 1930s (the actual time-frame of the movie). It's an interesting film with some interesting facts and insight into a time for the indian ancestors that has not been documented so well. The actors are all fairly good. The movie is funny and sad, with a bit of action. Overall the movie is a decent watch that anyone who liikes a little drama, history, and has respect for nature will enjoy. The downfall is the movie is really slow... and the pace never picks up. It's just a slow slow, 2 hour film that sort of bounces around to some scenes that really were in the movie strictly to make it longer that probably didnt need to be there. Nonetheless, it's good.

The Education of Little Tree Quotes