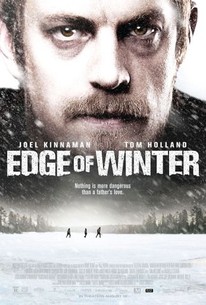 Recently divorced and laid off from his job, Elliot Baker (Joel Kinnaman) is desperate to spend more time bonding with his sons, Bradley (Tom Holland) and Caleb (Percy Hynes White). What starts as family day trip to teach his boys how to shoot turns into a nightmare when they become stranded. As they retreat to a desolate cabin, Elliot's mounting fear of losing custody pushes him to the edge. The brothers quickly realize that the man responsible for keeping them safe has now become their biggest threat.

Patrick Garrow
as Clerk
View All

News & Interviews for Edge of Winter

View All Edge of Winter News

Critic Reviews for Edge of Winter

Not much new here, but there are solid performances and you have to admire cast and crew for shooting amid some challenging surroundings in snowy Sudbury.

This film will be remembered (if at all) as one of the things Holland did before he was Spider-Man.

Director Rob Connolly (who co-wrote the script with Kyle Mann) has an understated but sharply honed visual sense that keeps the drama taut and engaging throughout.

"Edge of Winter" suffices as a diverting breath of recycled cool air.

Connolly and co-writer Kyle Mann deliver exactly the kind of film one would expect from the premise, but there's nothing wrong with someone getting an easy premise right on the first crack.

Some films do a slow burn. And some burn so slowly that they risk having their fire go out completely. Edge of Winter is, alas, of the latter variety.

Kinnaman's weekend father is a return to form, a twitchy, deeply flawed character we can't help rooting for even as we fear the worst ... He reminded me of Nicholson in 'The Shining' ...

Edge of Winter is still frosty enough to cut through its sometimes inert tone and a flat soundtrack.

There's a shift in perspective around the hour mark that doesn't work as elegantly as it should, but the cast carry it over the hump.

Almost works better as a revenge tale between a tree and a logger than it does a suspenseful story of survival. (It does not work well as either.)

Audience Reviews for Edge of Winter

What is it with future superhero actors and winter movies? Granted, I only have three examples (J-Law in "Winter's Bone", and Tom Holland/Joel Kinnaman in this). So, maybe don't set your watch by that. However, while "Edge of Winter" maintains a much more straightforward narrative than "Winter's Bone", it certainly keeps the same style of tension. Joel Kinnaman runs through a slow-burning but climactic arc in an attempt to hold on to his anger, masculinity, and fatherhood - which are all inextricably linked. It is an interesting character study that only occasionally reveals any cracks in his performance. The film is short enough that if I went into much further detail I would give away the plot, if that is any testament to how quickly it seems to rush by. The Canadian wilderness looks to be a popular place to shoot these days, no doubt because it is a beautiful, bleak landscape in which to lose sometimes thinly drawn characters. Fortunately, this small cast managed to make a convincing trudge through the horrors of the psyche and the callousness of survival. As a final note, I couldn't help but think Tom Holland looks like a less douchey Josh Hutcherson.