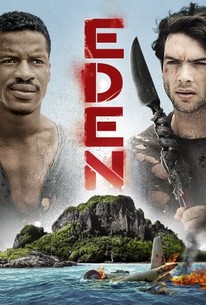 After their plane crashes off the coast of a deserted island, the remaining members of an American soccer team attempt to survive the harsh conditions of the island, and the deteriorating psyche of their teammates.

Seth Michaels
as DiStefano
View All

The mechanical script strands a capable young cast in a sea of hackneyed character types and soggy platitudes.

A tale of survival that makes you wish everyone involved would quickly run out of food and water.

How many stories are there that take place on an uncharted deserted island? I suppose such a thing was possible before there were google maps, but in 2016, these stories are almost in the realm of Science Fiction. Putting that aside for a minute, just how many types of stories can you tell, that take place in such a setting, and how many of them haven't already been told? Eden is nothing more than a cliche of these films, and despite not being a comedy, the fact that it has no originality to the story whatsoever is in fact laughable. After a world cup soccer team crashes near this island, and it's clear they won't be rescued, they set up a system of rules. The first major conflict is what to do with the severly injured man, who has very little chance of making it, who is costing valueable resources, sound familar Lost fans? After that, this film literally becomes Lord of the Files with soccer players in their twenties and thirties. The two sides are drawn and eventually one side leaves for another nearby deserted island. As resources continue to diminish, it becomes clear that only one side can survive and the battle is inevitable. Even the ending, which I would never reveal, is a rip off of another classic deserted island story, but maybe you like that setting and consider this the kind of film you might want to check out, okay, but first, consider this. Most of the cast are completely newcomers, and with the exception of Nate Parker, they're combined performances are a bigger disaster than the actual plane crash that brought them to this island. The bottom line, Eden is a familiar setting, featuring a story that's been done, and a cast that mumbles one cliche line after another, the whole thing just left a poor taste in my mouth.

Really poorly written survival movie. A close team of soccer players quickly turn on each other after being on the island for such a short period of time (literally less than 3 days). They go insane pretty much immediately upon landing on the island. It was also interesting to see that the plane was cut in half when it landed and some people DIED while others remained completely unscathed. The random sex scenes really threw me off too. There was one scene where the dude's friend got blown up and he was so upset. He went off by himself to sob and this girl comes over to comfort him and BAM they have sex right there in the sand....wait, what? The cinematography was pretty cool that's where the 2nd star comes from. The first star has to be there because RT makes you give even the worst movies on the planet one star. They way everything escalates so quickly just takes you out of the movie completely. Killing best friends after just a couple days on an island? I don't think so. It's a poorly thought out movie, but it's pretty to look at.