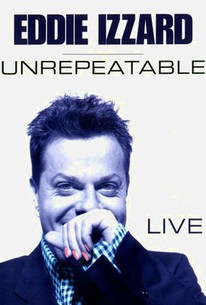 "Unrepeatable" was recorded at the Albery Theatre in March of 1994 for a limited sold-out engagement of seven weeks, where he played to 34,000 fans. He won rave reviews all around. According to the UK national daily The Independent: "If all the awards and nominations have gone to his head, Izzard's performance does not show it. When he pulls up in mid-flow there is the same sense you get with Robin Williams sometimes, of the audience racing to catch up with a mind that moves too quickly for them." Subjects comprised in this one-man show include: "New Improved Dyslexia," "Bizarre Wash," "Secret Magicians," "Dopey Politicians," "Jumpy Spiders," "Men In Dresses," "God's Creatures," "Aqua Zimmer Frame," "Horror Movies," "Star Trek" and "Do Earwigs Make Chutney?"

There are no critic reviews yet for Eddie Izzard - Unrepeatable. Keep checking Rotten Tomatoes for updates!

Not as good as Dressed to Kill, but still-- *BUNCH OF FLOWERS*

"Unrepeatable" is one of my top Izzard shows because it's one that is better seen. The show starts with a really nice tracking shot and Izzard's facial expressions and physical comedy are matching perfect with his material. Considering this was a "one take" show, perhaps that made the difference, but that too (that it is one performance and not a sly compilation of performances) is a huge acheivement.