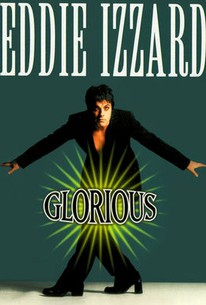 British comedian Eddie Izzard wears makeup, platform heels, and a shimmering magenta suit in Glorious, a video of his standup act filmed in England. Izzard takes a little bit of Robin Williams, a little bit of Jerry Seinfeld, even a little bit of Bob Newhart, but the final mix is absolutely his own and dizzily funny. It's not so much the subjects of his humor--though not many comics make jokes about classical mythology or evil giraffes--as it is the way he fluidly skips from thing to thing in a madcap free-associative whirl. He lulls you by seeming casual and almost sloppy, but when he needs to be precise his gestures and mimicry are razor sharp. There have been a million tired jokes made about trying to get a shower to stay at the right temperature, but Izzard manages to make even that funny. He's even funnier when he's imitating Sean Connery as Noah, trying to convince God that a speedboat would make a much better photo opportunity than an ark, or playing a beekeeper flirting with someone passing on the street. Much of the giddiness comes from his astounding sense of spontaneity. Half the show seems to have been made up on the spot, and if it wasn't, you boggle wondering how he could have possibly written something so ridiculous and yet appropriate. Though he uses a number of four-letter words, his humor is surprisingly clean, and even the most frank vulgarities seems like a bit of impish innocence coming out his mouth. Glorious indeed. --Bret Fetzer

There are no critic reviews yet for Eddie Izzard - Glorious. Keep checking Rotten Tomatoes for updates!

I've laughed myself senseless watching this!

Eddie Izzard is absolutely genius in my book. How he can keep up with what he's talking about after going in so many crazy directions is beyond me. It's not just the subject matter, which is much more than "did you ever...", but the pacing, which is manic, and the voices and sound effects, which are dead-on, that add to the fun. Of course, the fact that he's a full-blown cross-dresser -- a male tomboy, as he calls himself -- doesn't hurt. I've always loved the quirky oddball Brit sense of humor. And Eddie Izzard is brilliant at it.

The funniest stand up comedy routine ever. Full stop.