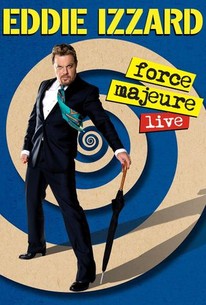 Eddie Izzard returns to stage in the biggest stand-up comedy world tour ever and his best Live yet. Filmed during his mammoth 2013/14 tour around 27 countries, Force Majure Live takes you on a truly hilarious journey, offering a rare and often bizarre glimpse into the mind of the master of surrealism, Eddie Izzard, a man who has inspired several generations of comics and who is universally recognized by fans and comics alike, as one of the world's greatest-ever stand-up's.

There are no critic reviews yet for Eddie Izzard Force Majeure. Keep checking Rotten Tomatoes for updates!