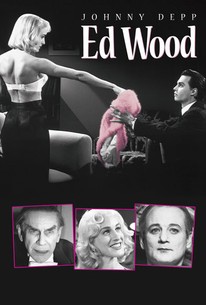 Critics Consensus: Tim Burton and Johnny Depp team up to fete the life and work of cult hero Ed Wood, with typically strange and wonderful results.

Critics Consensus: Tim Burton and Johnny Depp team up to fete the life and work of cult hero Ed Wood, with typically strange and wonderful results.

Critic Consensus: Tim Burton and Johnny Depp team up to fete the life and work of cult hero Ed Wood, with typically strange and wonderful results.

Ed Wood was a little known film-maker from the early 1950's who gained posthumous notoriety for his dreadful B-grade science fiction films in the mid-'80s. This film is producer/director Tim Burton's fictionalized portrait of Wood's strange, yet mediocre life and career. Burton filmed "Ed Wood" in black and white to recreate the atmosphere of Wood's films. The film primarily focuses on three aspects of Wood's life, his transvestism, his relationships with his oddball casts and crew as he tried to make his films on shoestring budgets, and his friendship with aging horror-movie great Bela Lugosi whom he tried to help.

Lisa Malkiewicz
as Secretary #1
View All

Beguiling rather than thrilling, oddly charming instead of transporting, meaning that Disney will have its work cut out for it with what is at heart a cult movie and a film buff's dream.

It certainly succeeds as a funny, touching tribute to tenacity, energy, ambition and friendship.

Mr. Depp isn't best known as a comic actor, but he gives a witty and captivating performance, bringing wonderful buoyancy to this crazy role.

Outrageously disjointed and just as outrageously entertaining, the picture stands as a successful outsider's tribute to a failed kindred spirit.

A good story about the (out) of the star system in Hollywood in 1950's. [Full Review in Spanish]

Burton succeeds in creating a benign parallel world where the last are the first and the insulted and injured become the recipients of all-star tributes.

A masterful ode to movie making and the horror genre.

Burton wraps it all in his singular vision, devoid of bells and whistles and all the more potent for its comparative subtlety.

"Ed Wood" takes the clumsy filmmaking backstory of Edward D. Wood, and makes it a fantastic film about terrible movies. Tim Burton directs the hell out of this film, and even though it screams his style, he keeps it a little on the down low here, letting the more of the substance out than the style, which is what true stories need. Johnny Depp gives one of his finest performances as the leading man living a dream of making films, while every one of them turn into disasters, because he just does not fully understand the industry. I loved "Ed Wood" from start to finish! The camerawork is unique, the post-production choice of Black and White is perfect, and the direction, along with the script, is just very very good all around. There is nothing wrong with this film whatsoever. It's an amazing little piece of film!

Burton treats his idiosyncratic character with great affection and respect, in a delightful (and very funny) biography that emulates with perfection the visuals of classic horror movies - making us even want to check out Ed Wood's turkeys. Besides, Depp and Landau are magnificent.

Burton and Depp show why they are a perfect match in this fantastic film.