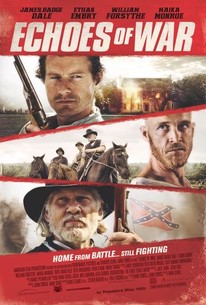 In post-Civil War Texas, two neighboring families are grieving tragic losses while they struggle to survive in this rural drama. The cattle-ranching McCluskeys have lost both a son and their entire herd to the war. The Rileys, mourning the loss of wife and mother Mary to illness, eke out a living trapping animals and selling their pelts. When Seamus Riley's brother-in-law Wade (James Badge Dale, The Lone Ranger, Iron Man 3) returns from fighting for the Confederacy, he soon discovers that Randolph McCluskey (William Forsythe, The Rock, Once Upon a Time in America) and family have been stealing animals from his family's traps. He decides it is intolerable and takes matters into his own hands, sparking yet another tragic and senseless war.(C) Arc Entertainment

News & Interviews for Echoes of War

View All Echoes of War News

Critic Reviews for Echoes of War

[A] sluggish post-Civil War drama directed and co-written by Kane Senes that wears its shopworn ideas too heavily on its sleeve.

A giant bore that presents viewers with the most familiar plot devices imaginable but fails to present them in a way that makes them worth sitting through once again.

The somber period western "Echoes of War" retraces some well-traveled moral ground but is invigorated by a cast that includes James Badge Dale, Ethan Embry and William Forsythe.

A gloomy, somewhat underwritten story of two families just after the Civil War, an exploration of the kind of disruption that lingers after fighting on the battlefield is over.

There's something stale about Kane Senes's tepid historical drama Echoes of War, which utilizes the genre's symbols without delivering on its potential for moral or narrative satisfaction.

This tale of the futility of revenge works well enough on its own modest terms.

The film never achieves its potential in terms of tension.

The film's visuals and script fail to evoke the necessary sympathy, despite some committed performances.

Though serious-minded, it's a turgid, pretentious attempt at an adult western.

The filmmakers had a powerful story here. They just didn't know how to tell it.

Most of Echoes Of War amounts to Hints Of Aggression, with the film struggling to find enough incident to reach feature length.

Echoes of War may not be the most dazzling movie of its kind ever made, but the solid acting and engaging ideas make it worth seeing.

There are no featured reviews for Echoes of War at this time.