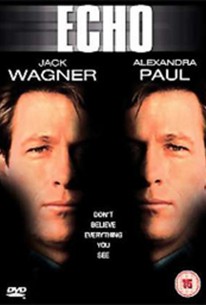 As youngsters, twin brothers Max and Steven survived the car accident in which their parents were killed. At that point, Max was taken in by relatives and raised in comfort in security -- while the more seriously injured Steven remained in the hospital, where he grew to manhood harboring a twisted, vengeful soul. Now an adult, Max (Jack Wagner) is a successful, happily married business executive. Insanely jealous, Steven (also Jack Wagner) hatches a sinister scheme to "steal" Max's life by kidnapping his brother and taking his place -- in both the boardroom and the bedroom. Originally telecast by ABC on January 5, 1997, the made-for-TV Echo has been released abroad as Deadly Echo.

There are no critic reviews yet for Echo. Keep checking Rotten Tomatoes for updates!

There are no featured reviews for Echo at this time.