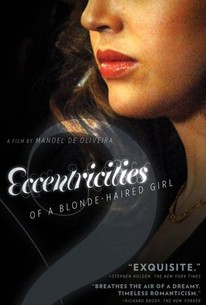 The unstoppable Manoel de Oliveira - 101-years-old but producing films at a pace few filmmakers of any age could rival - returns to Anthology with this spare, deceptively simple, disarmingly pleasurable, and finely-wrought gem, an adaptation of a story by the great early-modernist Portuguese author Eça de Queiróz. Opening on a train, where a visibly distraught man, Macário, begins to unburden himself to the woman in the seat next to him, the film tells the story of Macário's infatuation with a young blond woman he spies through an apartment window. Devoting himself to winning her, in the face of obstacles financial, familial, and practical, he finally achieves his goal, only to discover an unexpected "singularity" of his fiancée's character. A tragicomedy of manners, ECCENTRICITIES is at once genuinely classical and rigorously modern, with the balance, pacing, and control of a perfectly-crafted short story.-- (C) Anthology

Leonor Silveira
as Woman on Train

Filipe Vargas
as The Friend

Luís Miguel Cintra
as Himself

A curious, elliptical little film about people cocooned in their own romantic notions: at barely over an hour, the lethargic pace is easy to live with.

This is not one of Oliveira's most memorable works but it still provides a lesson in unobtrusive but pointed film-making.

The ending comes like a sharp punchline -- a warning, or perhaps a reassurance, that even when you get to the age of 100, life is no less mysterious.

Don't anyone tell or remind de Oliveira, please, that he is too old to be alive, never mind to be making miniaturist masterworks.

Transcends the delicate intricacies of language by remaining fixed in its own sense of time while seeming effortlessly timeless.

Even at a pleasant 64 minutes, it savors classical beauties, reaches tremendous depths and comes in with a satisfying bite.

... a perfectly executed short story, slight yet delightfully told with minimalist direction and imagery and a very European sensibility.

A mesmerizing, charming and disturbing morality tale of doomed love.

Oliveira, who was over a hundred years old when he made this film, crafts an interesting sixty-minute adaptation of a short story written by the 19th-century Portuguese writer Eça de Queirós, with an intriguing narrative that brings to mind the surreal style of Luis Buñuel.