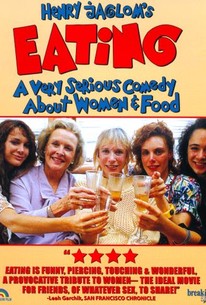 The title of Henry Jaglom's stream-of-consciousness Eating says it all. Three women (Lisa Blake Richards, Mary Crosby and Marlena Giovi), each celebrating a "milestone" birthday, decide to throw a joint party. Attending the revelries is French documentary filmmaker Martine Nely Alard, who becomes fascinated when none of the guests will touch the meticulously prepared birthday cake. As Martine begins interviewing the partygoers, she discovers the importance that food holds in each of their lives. One of the most revelatory improvisational monologues is delivered by a matriarch portrayed by Frances Bergen, the real-life widow of Edgar Bergen and the mother of Candice. Though Eating is not for everyone's taste, for those in tune with the fiercely independent Jaglom, the film is a cinematic smorgasbord.

The movie makes its point early and often: That its characters are hung up on food, and eat for unhealthy and obsessive reasons. It's true. We know it's true. We wait in vain for additional insights.

Goes on for too long and becomes overcooked, though parts of it are tasty in an idiosyncratic way.

Though largely shallow, Jaglom's high-concept serio-comedy is timely and has a few observant moments about women's food and beauty anxieties

Reveals America's obsession with the beauty myth and how it violates the self-esteem of women.

There are no featured reviews for Eating at this time.