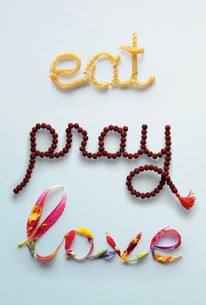 Critics Consensus: The scenery is nice to look at, and Julia Roberts is as luminous as ever, but without the spiritual and emotional weight of the book that inspired it, Eat Pray Love is too shallow to resonate.

Critics Consensus: The scenery is nice to look at, and Julia Roberts is as luminous as ever, but without the spiritual and emotional weight of the book that inspired it, Eat Pray Love is too shallow to resonate.

Critic Consensus: The scenery is nice to look at, and Julia Roberts is as luminous as ever, but without the spiritual and emotional weight of the book that inspired it, Eat Pray Love is too shallow to resonate.

Liz Gilbert had everything a modern woman is supposed to dream of having -- a husband, a house, a successful career -- yet like so many others, she found herself lost, confused, and searching for what she really wanted in life. Newly divorced and at a crossroads, Gilbert steps out of her comfort zone, risking everything to change her life, embarking on a journey around the world that becomes a quest for self-discovery. In her travels, she discovers the true pleasure of nourishment by eating in Italy; the power of prayer in India, and, finally and unexpectedly, the inner peace and balance of true love in Bali.

Richard Jenkins
as Richard From Texas

A. Jay Radcliff
as Andre

Gita Reddy
as The Guru

Silvano Rossi
as Paolo the Barber

Sd Pandey
as Man in Temple

Richard V. Vogt
as Man in Restaurant
View All

A tiresome, humourless, lifeless, overlong dirge in which the lofty pretention to say something deep about the quest for self and the female condition all gets blown away by an insipid, off-the-shelf romantic-movie ending.

Basically a picaresque rom-com about a girl who needs to feel OK about having everything she could ever want.

It's in equal measure patronising, sententious and obnoxious.

On and on it goes, 140 minutes of tranquillising non-drama. Is there anything to wonder at in its journey to the centre of an ego?

In the end, the film is far less affecting or thought-provoking than the book.

Eat Pray Love is more of a romanticized travelogue, rather than a truly transformative one.

... almost two and a half hours in which [Julia Roberts] displays her charisma... [Full review in Spanish]

With 6 million readers of Elizabeth Gilbert's memoir, clearly, the movie has big shoes to fill. It may not succeed, but Julia Roberts and the film's designers give us a lot to enjoy.

An engaging but deliberate chick flick at times, Eat, Pray, Love has the quintessential chick flick star at the helm with Roberts, who played the role beautifully...

The unexamined privilege, the idealization/exotification of all places east, the canned spirituality, the sensual goddamn spaghetti-it's all so focus-group-tested and Oprah approved and self-perpetuating and embarrassing.

Let's face it. There are some books that should never be made into movies.

Even if Julia Roberts is adorable and the stunning scenery will probably make you want to go backpacking around the world, this weak movie feels a bit bloated and too long for a romantic drama, and it doesn't have what it takes to keep our interest for all that running time.

Not as bad as I expected, but still pretty missable. I found the book the same way. I pretty much used this as background noise while I did housework. I missed bits, but it was excessively long and not all of it was terribly interesting. I didn't hate Liz, though, as others seem to. Not everyone has the same idea of a satisfying life. Yes, her husband was fine, but they were not suited. It doesn't make Liz a bad or shallow person because she recognised this and was honest instead of dragging it out and them both feeling miserable. Some of the travel bits were enjoyable. The food in Italy looked delicious and I enjoyed her friendship with the young Indian girl. Film had really lost me by the "love" part - I didn't buy Julia and Javier as a couple at all.

A film I've been eagerly anticipating. I'm not a huge fan of Julia Roberts, or of Romantic Dramas in general, but for me, it was the travelling and spiritual journey which was of great interest and is an enlightening true tale. This, I'm sure, will be the first of many watches.


I mean, here I am with a ninth-generation medicine man and what do I wanna ask him about? Getting closer to God? Saving the world's starving children? Nope. I wanna discuss my relationship.
And then it happened. After months with the borrowed DVD "in hands", I watched it. There´re moments in our life, or nothing but random Friday nights, where the never happens. Not that I have said I would never watch it, but I had not even the slightest desire to do it. Last Friday, I did. The whole thing is that Eat Pray Love is not that bad as I expected and that´s the reason why I am here writing. The film itself is as foreseeable and poor as you can imagine - specially if you are Brazilian or knows the sonority of our Portuguese that well that Javier Bardem´s accent makes you want to kill Francine Maisler, the casting director - but, and maybe that´s just me, there´re good things you can get of it. I´ve been in a sort of inner journey as never before, so how and what called my attention, might have not the same effect on you. Also, I am pretty sure all its glories come from Elizabeth Gilbert´s book, so if you read it, what I didn´t, I am afraid that the film can be a null experience.
I have a friend, Deborah, a psychologist who was asked by the city of Philadelphia if she could offer psychological counseling to Cambodian refugees, boat people who had recently arrived in the city. Deborah was daunted by the task. These Cambodians had suffered genocide, starvation, relatives murdered before their eyes, years in refugee camps, harrowing boat trips to the West. How could she relate to their suffering? How could she help these people? So guess what all these people wanted to talk about with my friend Deborah, the psychologist. It was all ´I met this guy in the refugee camp. I thought he really loved me... What should I do? I still love him.
Yes, this is how we are. Menschliches, Allzumenschliches. What I really like about Gilbert´s journey is how true it is. True in all its meanings. It´s easy to adopt concepts and to mouth slogans like the "The Physics of the Quest" as it´s easy to goes after a "searching for something" that, actually, covers an escapism. I don´t think Liz was in search of herself or a meaning, but escaping from herself, what can be seen in how she easily jumped into a relationship to another only changing the "costume", adapting herself to the "new" situation. How many times do we do that and not even in the relationship field? From being completely consumed with being the perfect wife and cook, fed up, instead of creating a real change, we only replace the "object" to chanting and meditation, fishing or whatever? That´s all part of a non conscious state. Sometimes it´s clearly visible to others, except to us, like Liz´s friend´s husband noticing how she looked like Stephen, the ex-husband, and now kind of look like David, the new boyfriend. "What I meant was, you know how people start resembling their dogs?" We can see amounts of this everywhere. Today I like politics, tomorrow, depending on the group or person I am with, I become vegetarian. We may think we did change inside, but we end up modificating nothing but the outside: statements, vocabulary, clothes. Even if the points of view are not the same anymore, they are probably reflections of something else, as volatiles as the air.
- I'm falling in love with you. - I'm not who you think I am. I'm just your fantasy. - No, that's bullshit. You're real. - Here's what he doesn't know yet. I disappear into the person I love. I am the permeable membrane. If I love you, you can have it all. My money, my time, my body, my dog, my dog's money. I will assume your debts and project upon you all sorts of nifty qualities you've never actually cultivated in yourself. I will give you all this and more...until I am so exhausted and depleted the only way I can recover is by becoming infatuated with someone else.
You know, if you could clear out all that space in your mind that you're using to obsess over whatever it be, you'd have a vacuum with a doorway. It may not be a doorway, but if a film makes you think, and it doesn´t matter if it was made to entertain, that´s already something. (two and a half stars because of that)