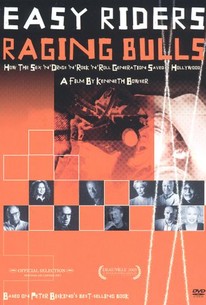 The 1970s have come to be regarded as the last true golden age of American filmmaking, and this documentary, based on Peter Biskind's book of the same name, looks both at the movies and the people who made them in an era when the Hollywood system was briefly turned upside down. Easy Riders, Raging Bulls begins in the late '60s as the major Hollywood film studios were suffering massive losses when expensive blockbusters began to fall out of favor and a new generation of more independent and free-thinking creative minds were starting to make themselves heard. With the critical and financial success of Easy Rider, the major studios began to cautiously embrace the "new Hollywood," and directors such as Dennis Hopper, Bob Rafelson, Hal Ashby, Peter Bogdanovich, William Friedkin, Martin Scorsese, and Robert Altman produced striking and ground-breaking work that also found favor with the mass audience. However, professional missteps and personal demons robbed many of the "new Hollywood" talents of their powers by the decade's end, and when two of the lesser lights of the movement, George Lucas and Steven Spielberg, enjoyed unexpectedly massive success with films which creatively looked to the past while economically changing the stakes of the movie business, many of their peers were lost in the shuffle. Originally produced for broadcast on the BBC, an expanded version of Easy Riders, Raging Bulls was aired on the American cable outlet Trio.

This is a comprehensive and uncompromising look at some of the films that still influence many independent film-makers today - an absolute must for fans of Seventies cinema.

What nobody disputes is that the "film brat" generation of Spielberg, Lucas, et al., saved Hollywood. The question now is, who's to save us from the Hollywood they created?

The movie works as a Cliff Notes version of the era.

A two-hour history lesson on the world's most fascinating subject, and it goes without saying that a flick like this is a Movie Animal's fondest wish.

A good documentary that serves as an introduction to the much better book. Watch this first but then read the book. There's more sensationalism involved but it also covers much more detail. A good introduction overall.

An AMAZING documentary on Hollywood's history and its mutation.