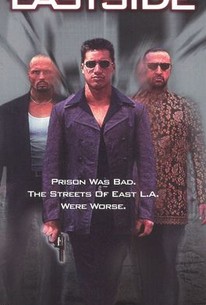 Released from prison on his 21st birthday, Antonio (Saved by the Bell's Mario Lopez) pays a visit to his older brother, Horatio (Mark Espinoza), an uptight attorney embarrassed by his Latino heritage. The brothers are connected by their work for crime boss Armando De La Rosa (Efrain Figueroa), for whom Horatio provides "consulting" services and Antonio collects debts. When De la Rosa enlists Antonio to bully the proprietor of a youth shelter off his property to make way for a casino, the young man changes his priorities, thanks in no small part to his friendship with the proprietor (Richard Lynch) and his burgeoning relationship with the old man's granddaughter (Elizabeth Bogush). Together, Antonio and Horatio try to bring an end to De La Rosa's megalomaniacal reign over the neighborhood.

C.C. Boyce
as Girl at Bar
View All

Sad imitation of Stand and Deliver.

There are no featured audience reviews yet. Click the link below to see what others say about Eastside!