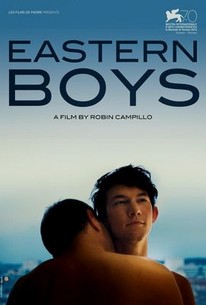 Arriving from all over the Eastern Bloc, the men who loiter around the Gare du Nord train station in Paris are scraping by however they can, forming gangs for support and protection, ever fearful of being caught by the police and deported. When the middle-aged, bourgeois Daniel played by Olivier Rabourdi approaches a boyishly handsome Ukrainian who calls himself Marek for a date, he learns the young man is willing to do anything for some cash. What Daniel intends only as sex-for-hire begets a home invasion and then an unexpectedly profound relationship. The drastically different circumstances of the two men's lives reveal hidden facets of the city they share. Presented in four parts, this absorbing, erotically charged drama from writer-director Robin Campillo is centered around anonymous liaisons, in which motivation, risk, and desire produce volatile and unexpected consequences.(C) First Run Features

Aitor Bourgade
as Guillaume
View All

Critics Consensus: Focus is Sleek and Slick But Too Twisty

Writer-director-editor Robin Campillo has crafted an unruly yet pointed drama that should intrigue patient viewers.

The movie argues that these teens' lawless, selfish mentality is a by-product of having grown up in war-stricken countries such as Chechnya, where they lived through horrors that permanently skewed their moral compasses.

Both surprisingly resonant, and something of a thrill-ride.

[Campillo] leaves us, at the end, in an appropriately ambiguous place.

Explores interlocking themes of sexuality, immigration and power dynamics with a cleareyed sensitivity and refuses to demonize even its shadiest characters.

By turns a frightening home-invasion drama, a tender love story and a tense hide-and-seek thriller, with far more control over these unsettling tonal slides than initially seems feasible.

How this all sorts itself out is a nail-biting treat...

Eastern Boys cleanly escapes any accusation of blandness. An emotional uppercut of a film, Campillo's latest is one which may take several days to fully recover from.

This is a tough, important film, and one that wields ambivalence like a cudgel.

Wholly unsatisfying, interminable in length with marginal acting, at best, there is little but the opening 15 minutes and the mesmerizing Daniil Vorobov to recommend this film.

The film tackles solidarity and solitude, economic class, language and lingering ages -- managing to remain engaging throughout most of its two hours-plus running time.

Dour, dark sexual drama about a rich, middle-aged French pervert (Olivier Rabourdin) who arranges for a rent boy to turn up to his plush apartment only to find his plans going awry.

There are no featured audience reviews yet. Click the link below to see what others say about Eastern Boys!