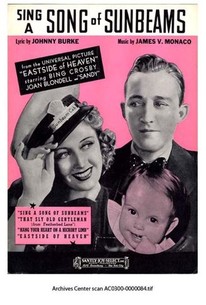 East Side of Heaven Photos

Bing Crosby plays a tune-happy cab driver who finds himself the reluctant recipient of an abandoned baby. Together with his roommate, dour doorman Mischa Auer, Crosby offers care and shelter to the infant until he can locate the parents. The baby brings in some unwanted publicity for Crosby, which costs him his job--no real problem, in that a happy ending is obviously in the offing. East Side of Heaven was the first of a two-picture deal between Bing Crosby and Universal Pictures, which turned out to be a smart move money wise for both parties. Crosby's leading lady is the vivacious Joan Blondell, who later characterized her costar as "Aloof...I think he was born that way." The infant in the story is played by Baby Sandy (Sandra Henville), who was subsequently launched into a brief "B" series of her own before retiring at the advanced age of four.

Russ Clark
as Policeman
View All

Critic Reviews for East Side of Heaven

There are no critic reviews yet for East Side of Heaven. Keep checking Rotten Tomatoes for updates!

Audience Reviews for East Side of Heaven

Cute, far fetched comic musical with Bing and Joan making a fine couple. There is one amusing and impressive number that takes place in a late nite diner, as these things do in old time musicals, that is a highlight of the movie and Bing is in fine voice. A very pleasant diversion.

A very sentimental, and contrived movie. Crosby is charming as usual, and the romance is predictable, but I sort of liked it.

East Side of Heaven Quotes