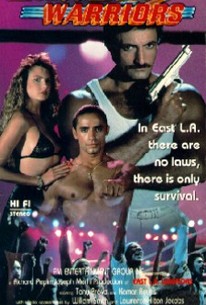 When powerful East L.A. drug lord Chesare (Lawrence-Hilton Jacobs) hosts a modern version of the gladiator games in which contemporary street gangs battle one and other to the death, his sworn enemy Aurelo (Tony Bravo) teams with his violent protégé Paulo (Kamar Reyes) to bring the sadistic criminal mastermind down in director Addison Randall's two-fisted action thriller. Chesare is the only man who holds power over L.A.'s most notorious street gangs, and to wield his might he devises a deadly series of games in which rival gang members will fight until only one is left standing. His reign is quickly coming to an end though, and when Aurelo and Paulo propose that the brutal battles be fought not to the death but to first blood instead, Chesare finally summons the courage to step into the ring and do battle with the one foe that could truly bring about is downfall.

Debra Giometti
as María
View All

There are no critic reviews yet for East L.A. Warriors. Keep checking Rotten Tomatoes for updates!

There are no featured reviews for East L.A. Warriors at this time.