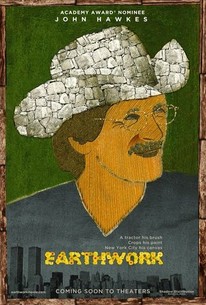 EARTHWORK is the true story of real-life crop artist Stan Herd (played by Oscar nominee and Spirit Award Winner for "Winter's Bone" John Hawkes, in his first starring role), told through a single episode of his life. In 1994, Stan traveled from Kansas to New York City and risked everything to create a massive environmental artwork on land owned by Donald Trump. The multi-acre piece was made from soil, rock, plants and vegetation near an underground railway tunnel. Stan recruited a number of homeless individuals living in the tunnel as his crew. Over the months it took to complete the earthwork, Stan dealt with the difficulties of bringing his unique, rural art form to an urban canvas and the many costs exacted upon his life. In an effort to show his unique perspective to a larger audience, Stan unexpectedly encountered the true meaning of his art and it's ultimate, lasting rewards. Shot almost entirely in rural Kansas (with a one-day shoot in New York City) on a minimal budget, EARTHWORK is Chris Ordal's feature film debut. Ordal, a University of Kansas alum, was taken by Stan Herd's dedication to his temporary art and found it the perfect story to tell through film, a permanent art form. "It was important to me that my first feature capture a story that needed to be told via the cinema. Stan Herd's art is temporary, eventually returning to the earth after it has lived its life. EARTHWORK is an attempt to share the beauty and truth that Stan creates with an audience through a medium that can last forever. Stan has to get people into a helicopter or a tall building in order for them to see his work, so getting his art on the big screen finally allows audiences to experience his art and discover his incredible story." The filmmakers were very determined to exemplify the spirit of Stan Herd throughout production, and thanks to an amazing and supportive crew, EARTHWORK was a production as "green" as the story it told. -- (C) Official Site

Sam Greenlee
as El-Trac
View All

"Earthwork" takes an unexpected swerve but one that adds layers of meaning and emotion to a film that is as beautiful and wrenching as it is unassuming.

John Hawkes brings a laconic soulfulness to this ultra-low-key, only mildly involving tale of artistic pursuit.

Directed, written and produced by Chris Ordal, "Earthwork" is best left to TV.

Earthwork's narrative follows too-familiar templates, and its characters lack the careful detail of Herd's own art.

Imagine spending an afternoon watching a bunch of vagrants putter around on an abandoned city lot, and you've pretty much nailed the viewing experience of "Earthwork," a painfully dull account of a year in the life of the Kansas crop artist Stan Herd.

It is a story that would have been better served by a documentary rather than the oddly uninvolving film it became.

While we're grateful for Ordal's introduction to this atypical artist, the film's focus on the sentimental side of the story is at the expense of showing us enough of his terrestrial achievements.

Hawkes is finally getting the great roles he has long deserved.

It's a rare film that makes viewers love a fellow who takes needless chances.

Ultimately, "Earthwork" poses an interesting question. Does the true value of art lie in its creation or the pleasure that others get while viewing it?

This is a movie about work and about the satisfaction that a person can find in accomplishing something.

There are no featured audience reviews yet. Click the link below to see what others say about Earthwork!