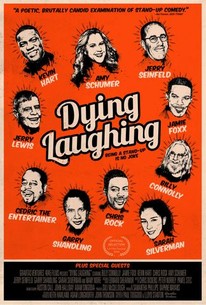 A stand-up comedian is his or her own writer, director and star performer. Unlike any other art form, there is no safety net. In its singular realization, comedy thrives on a stage--often in front of hostile audiences. For most people, baring your soul and being heckled would be a life-changing trauma. For stand-ups, it's just part of the routine. Directors Lloyd Stanton and Paul Toogood achieve a startling level of intimacy in a series of riveting interviews with Gary Shandling, Chris Rock, Kevin Hart, Jerry Seinfeld, Sarah Silverman, Billy Connolly, Amy Schumer and many other masters of the comedy universe; allowing in-depth access to the emotional and psychological highs and lows of answering the call to become a comic.

Get Out Is Certified Fresh

The endless conveyor belt of talking heads does rather lose its lustre over time, and some actual standup would have been welcome, but there's a dizzying amount of insight ...

Subject after subject - joke-crafting, set-building, room-running, dying on stage, living on the road, etc. - gets treated with bloodless abstraction by people who tell funny, engaging stories about their experiences for a living. Weird.

Once the movie hits its true stride it's really fascinating.

Pared down, this overcrowded movie could be a teaching tool in a comedy school. But as one comic after another recalls triumphs, misadventures and painful lessons learned, the stories become redundant.

The movie kicks off poorly, with a battery of familiar conceits from big stars.

It's great and it's valuable and it's wonderful, because we love seeing and hearing these all-time greats talk about what they do with such passion and candor.

Dying Laughing strikes that delicate balance between being very funny and extraordinarily moving at times.

Dying Laughing's dozens of interviews run the gamut from authenticity to pretense.

Dying Laughing cuts through the stage persona and finds the humanity behind the jokes.

Dying Laughing masterfully weaves in a humanity to the art of stand-up no film has ever approached in terms of clarity.

By juxtaposing the monochrome talking heads with colour snapshots of life on the road, the co-directors convey something of the agony and ecstasy of a potentially soul-destroying vocation.

Dying Laughing does a great job in highlighting the highs and the lows of the profession, but where the film doesn't get it 100% right is by offering very little background on each of their interviewees.

There are no featured audience reviews yet. Click the link below to see what others say about Dying Laughing!