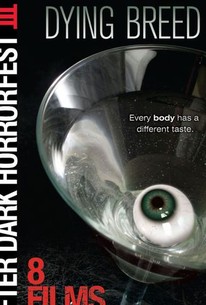 The noble search for a dying breed leads an ambitious zoologist to the discovery of a far more sinister species in this brutal Australian shocker featuring Leigh Whannell (Saw) and Nathan Phillips (Wolf Creek). Eight years ago, Zoology student Nina (Mirrah Foulkes)'s sister was searching for evidence of the elusive Tasmanian Tiger when she suddenly vanished without a trace. Before disappearing, however, she did manage to send her sister a mysterious paw print that seemed to suggest that the species was still flourishing somewhere in the vast Australian wilderness. Much like the Sasquatch, the Tasmanian Tiger is a creature that modern scientists have dismissed as legend - but now that Nina has evidence, she's fully prepared to breach Tasmania's dense and dangerous forests in order to prove that the reclusive creature really exists. As Nina, her partner Matt (Whannell), his old friend Jack (Phillips), and his girlfriend Rebecca (Melanie Vallejo) make their way deep into the heart of Tasmania, it quickly becomes obvious that Nina is completely ignorant to one of the isolated island's darkest legends. Back in the 19th Century, when Australia was a barren penal colony, a dangerous convict named Alexander Pierce (aka "The Pieman"), staged a daring escape from the island's most heavily guarded prison. Later, in order to survive, Pierce resorted to eating his fellow escapees. Though Pierce would be hung for cannibalism in 1824, by the time he was captured it was already too late. Pierce had bred, passing on his insatiable appetite for human flesh the next generation. Nearly two centuries later the Tasmanian Tiger seems to have finally become extinct, though the Pieman's lineage is still going strong. Now, in a land where human meat is scarce, Nina's expedition will fall prey to species with a savage appetite, and a murderous motivation to keep their bloodline strong.

It's a textbook gorefest. Give it a miss if you don't like blood.

There is no civic responsibility in horror. You can insult whomever you like, so long as you make it scary. This one has a few good moments but not enough to rattle one's bones.

Even by the low standards of other horror-movie victims, the foursome here seem blithely clueless, always splitting up for no good reason and running headlong into ambushes.

If Geoffrey Hall's cinematography is eerily beautiful, capturing the isolation and subdued menace of the Tasmanian hinterlands, then there is little else in Dying Breed that, to quote protagonist Nina, "nobody's ever seen before".

The setting is the island of Tasmania rather than the Australian outback, but after WOLF CREEK and STORM WARNING, any city folk stupid enough to wander this far off the track deserve whatever they get - and boy, do they get it.

It tries hard to be horrific and gruesome, even introducing a bit of fashionable torture near the end, but only the most credulous will find it genuinely scary.

Right from the opening credits, with their strangely beautiful blown-up images of blood and the accompanying darkly rhythmic score, you're primed for something terrible to happen.

Grisly as it needs to be, Dying Breed is nevertheless quite a sophisticated horror film, layered with elements and peopled with leading characters who are more than stereotypes, thanks also to top performances.

If you're looking for a horror flick that wants to give you a 'you are there -- and it's freaking miserable' vibe, this one should fit the bill quite nicely.

I decided to watch this movie because I saw Leigh Whannell was in it. I'm glad he's still alive, I was sad after I watched Saw. The movie definitely wasn't as bad as some of the FearNet movies I've seen. I did have some problems with it though, like the amount of unnecessary characters. Only a handful of characters seemed important and contributed something to the plot. I wasn't really feeling the plot either. I was more interested in the sister's story to be honest. She seemed like she went through hell, and it looked awesome. Sadly, there was not too much focus on that part, only the occasional flashbacks. I think if the sister's story had been the main plot, the movie would've been more enjoyable. ....I liked the twist. I didn't see that coming. It was a pretty okay movie. I actually watched the whole thing and didn't fall asleep. That says something.

This is a real freaky movie. It will keep you on the edge most of the movie, great slasher type film, seems like a group in the wild woods have taken to inbreeding and are looking for new mates. Mean while a group of young people go exploring for a rare animal only to get caught up in this groups web. Some neat killing scenes, Worth 4 stars