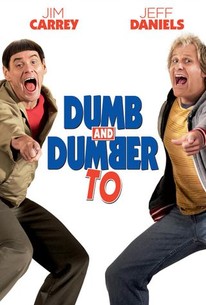 Critics Consensus: Dumb and Dumber To does have its moments, but not enough of them -- and the Farrelly brothers' brand of humor is nowhere near as refreshingly transgressive as it once seemed.

Critics Consensus: Dumb and Dumber To does have its moments, but not enough of them -- and the Farrelly brothers' brand of humor is nowhere near as refreshingly transgressive as it once seemed.

Critic Consensus: Dumb and Dumber To does have its moments, but not enough of them -- and the Farrelly brothers' brand of humor is nowhere near as refreshingly transgressive as it once seemed.

Dumb and Dumber To Photos

Jim Carrey and Jeff Daniels reprise their signature roles as Lloyd and Harry in the sequel to the smash hit that took the physical comedy and kicked it in the nuts: Dumb and Dumber To. The original film's directors, Peter and Bobby Farrelly, take Lloyd and Harry on a road trip to find a child Harry never knew he had and the responsibility neither should ever, ever be given. The Farrelly brothers produce Dumb and Dumber To alongside Riza Aziz and Joey McFarland of Red Granite Pictures. They are joined by fellow producers Charles B. Wessler and Bradley Thomas. Universal Pictures will distribute the film in the United States, Canada and select international territories.(C) Universal

Matthew Cardarople
as Inventor No. 1

News & Interviews for Dumb and Dumber To

Parental Guidance: The DUFF, McFarland USA and more on DVD
New on DVD & Blu-Ray: Birdman, The Theory of Everything, and More
Now Streaming: Birdman, Big Hero 6, Life Itself, and More

View All Dumb and Dumber To News

Critic Reviews for Dumb and Dumber To

The gags run the gamut from the inspired to the amusingly corny -- and are hung on one of the Farrellys' patented convoluted plots.

The occasional uproarious moment is small reward for the long scenes we're forced to endure of Carrey and Daniels gurning and grinning as if they are fresh out of bedlam.

Let's face it, honking, braying dullards no longer feel like a novelty in mainstream entertainment.

Scrappy and crappy but knowingly so.

It's a rental, rather than a visit to the cinema.

Often, the comedy's just spiteful, sour or sloppily executed - or, in the case of a running joke about the hideous middle-agedness of Kathleen Turner's character, the mother of Harry's daughter, all three at once.

Something is off here...the pacing, the jokes, I can't entirely put my finger on it.

This could have easily been a film that relied on the good will of its fan base and coasted by as a cash grab. Instead, it is a comedy that is a little smarter than I expected, with some inspired gags and some stinkers as well.

It just feels about a decade too late. This isn't dumb humor, this is just dumb.

It turns out that Dumb and Dumber To is not only stupid and unfunny, but also horribly outdated.

The Farrellys emphasize fellowship, camaraderie and solidarity... through a filter of ridiculous humor. [Full review in Spanish]

If you loved the first one, you'll at least enjoy this one, though it's hard to imagine this sequel has done anything special for the - am I really writing this? - franchise.

Audience Reviews for Dumb and Dumber To

I had to watch this because of my unabashed love of the original movie, but I pretty much expected a letdown after this long. While it does have its funny parts, most of the movie is just too dumb to be funny. The original movie rode that line between dumb and too dumb just right, but this one goes way over the top. The actors do not shine in this like they did in the original either. They are more like caricatures of the original characters despite being the same actors. They try way to hard instead of letting it come natural like they did the first time, which is a shame. This was by far my biggest disappointment with the film. I did get a bit of nostalgia at some parts and laughed here and there, but altogether this is a forgettable sequel that isn't completely awful, but not really recommendable either.

Is it just me or does this whole production reek of desperation? Again is it just me or does it seem like the once titanic Jim Carrey is slightly hard up for some hot publicity and attention, so he has agreed to drag this old comedy up from the depths to try and get back into the limelight somewhat. I'm sure I once recall him saying he would never do sequels or something like that, but that was back when he was bigger than Hollywood itself. I mean I'm sure he's not short on change but this really feels like two actors (and maybe directors) clawing and clambering to get back into the public eye...and have a hit. The movie starts off with the lamest gag, seriously its so stupid its not even funny, it just defies all sense of realism. Yes I know the film is based on these two morons and things like this are suppose to be plausible but really? In short Lloyd was so heartbroken about losing Mary (from the first movie) that he fell into a vegetable-like state and was stuffed in a mental hospital where he stayed for...wait for it...twenty years. When the movie kicks off with Harry visiting him we eventually discover that apparently Lloyd has been faking his break down for the last twenty years for a joke. So we are meant to believe that for the last twenty years Lloyd has been living in a mental hospital being treated like a real patient...purely for a joke...ha-ha-ha...no. So once that ridiculous idea has past the rest of this pointless endeavour continues. By that I mean Harry needs a new kidney so he must find a relation to give him one. One thing leads to another and the duo discover Harry has a daughter so off they go on another road trip to find her. The snag in this sequel being the woman who adopted Harry's daughter is an unscrupulous money grabber who's after her husbands money and ingenious invention. She and her accomplice won't let anything stand in their way of getting the inheritance by killing off her husband. So that's the plot, now fill in the rest of the run time with lots of rehashed visual gags and jokes that we saw in the original movie. No I'm not joking, most everything the idiotic pair do and say in this movie have been regurgitated from the first movie. We see their old shaggy dog van again albeit briefly, the old music track 'Too Much of a Good Thing' by The Sons suddenly cranks up and for a split second I got excited even though this was clear rehasharama fodder. Unfortunately this joy is short lived but I guess had it gone on then the rehash scale would be blowing its wad. Fear not the duo manage to drive another hilariously unroadworthy vehicle instead just in case you missed that from the last movie. Along with that most of the dialog and verbal gags have been reused...and I mean all of them from 'suck me sideways' to 'I like it a lot', hell they even go past one of the old locations seen in the first film. I guess what's really unsettling about this fiasco is the fact that Carrey's portrayal of Lloyd is so...psychotic. In the first film the pair were a lovable innocent bumbling duo of simpletons. This time around Harry is still on par but Lloyd comes across like a sheer lunatic who swings from acts of soft core violence to having bouts of tourette's and hysteria. You never know what he's gonna say or do, half the time you feel like you're watching The Riddler again. To me it really felt like the Farrelly brothers were really struggling to come up with things for these guys to do. Watching Carrey make the same faces or watching him eat an entire hotdog in one go (and various other foods in silly ways) just seems rather lacking to me. To add insult to injury the soundtrack for this movie was also pretty awful really, clearly trying to copy/equal the original movie in every way possible but failing. From the visual gags with the blind birdman at the start (a grown up Billy), to the practical goofs on the guy trying to kill them, to the ending where the duo are yet again held up at gun point on the brink of being killed. This sequel is basically exactly the same shit as the original, its your standard modern day rehash which we are seeing time and time again. To make things even worse the final twist in the tale at the end actually does prove how utterly pointless this entire ordeal was. Its suppose to be funny but it just left me thinking how totally senseless, aimless and purposeless this movie is. It also speaks volumes to me that the end credits are mixed with little funny segments from this sequel and the original. Its pretty clear to me nobody was exactly fully confident about this movie hence the need to fall back on the first so much. They couldn't even let the old character of Sea Bass go. Had to crowbar him back in there for good measure along with his buddy and that now infamous line 'kick his ass Sea Bass!', because seeing the exact same shit again twenty years later is comedic genius.

Yes it's amusing but as a paying audience don't we deserve better!? I love Daniels and think he is an exceptional actor but this is truly awful!

I LOVE the original "Dumb and Dumber". So needless to say, I was pretty excited to watch this. I kept expectations in check, as I didn't think it could live up to the original. Which, it does fall short, but it is great for nostalgia and revisiting Harry and Lloyd. Much like last years "Anchorman 2", this is like reuniting with some old friends and getting some familiar laughs. The story is simple(and dumb), they try to find Harry's daughter because his kidney is failing and he needs a transplant. Same jokes, same routine, and same laughs. There are some great one liners here that I've been quoting for weeks. But, in the end I wasn't as in love with it as I had hoped. But, the copy I watched wasn't the best, so I think once I get a better copy, it could be a different experience. But, it is definitely a movie I will revisit, and probably laugh my butt off at again and again.

Dumb and Dumber To Quotes