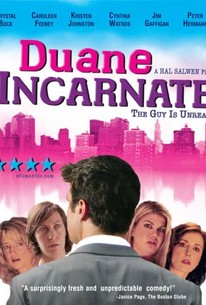 While writer/director Hal Salwen won over critics and festival audiences with his low-key directorial debut, Denise Calls Up, his second feature, His and Hers, never made it past the festival circuit. Salwen next produced Duane Incarnate, a quirky romantic comedy. Gwen (Caroleen Feeney, who appeared in Salwen's earlier films) narrates the strange tale of her and her three friends, the statuesque Fran (Kristen Johnston), the lovely Connie (Cynthia Watros), and the dumpy, unemployed Wanda (Crystal Bock). Three of the four pals seem to be feeling particularly good about their lives. They're all in fulfilling relationships, and Gwen's trainer boyfriend (Jim Gaffigan) has them on an exercise and diet program. One day, Wanda, who has no luck with men, tells them that she's met the perfect guy, and fallen completely in love with him. As she describes him, with his good looks, fancy job, and incredible passion for her, he sounds too good to be true, and Gwen begins to suspect that Wanda has invented him. Challenged to produce her new beau, Wanda introduces the tall, handsome Duane (Peter Hermann) to the gang. Her friends are incredulous and soon grow extremely jealous. Their own relationships begin to self-destruct, and some unusual weather patterns have Gwen believing that Wanda has somehow conjured Duane through the force of her imagination, and thereby ruptured the very fabric of the universe. The three distraught women team together, determined to break up the happy couple at all costs. Shot on-location in New York City, Duane Incarnate had its world premiere at the 2004 Tribeca Film Festival.

There are no critic reviews yet for Duane Incarnate. Keep checking Rotten Tomatoes for updates!

There are no featured reviews for Duane Incarnate at this time.