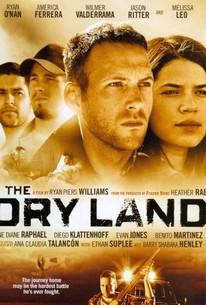 A soldier comes home from the war but can't find peace in his heart and mind in this independent drama. James (Ryan O'Nan) returns to his hometown in Texas after serving a long hitch in Iraq, and is warmly welcomed by his wife, Sara (America Ferrera), and best friend, Michael (Jason Ritter). However, his homecoming party is awkward and it's clear James is not the same as he was before he left. Sara's father, David (Benito Martinez), arranges for James to get a job working beside Michael at a meat processing plant, but when an argument with a co-worker turn violent, James' life goes into a tailspin and Sara leaves him. James still hasn't come to terms with his experiences in Iraq, and a reunion with one of his Army buddies, Raymond (Wilmer Valderrama), convinces him he needs to make contact with Henry (Diego Klattenhoff), a fellow soldier who was part of an incident that scarred them both. The Dry Land was the first feature film from writer and director Ryan Piers Williams, and received its world premiere at the 2010 Sundance Film Festival. ~ Mark Deming, Rovi

Misty Upham
as Gloria the Receptionist

News & Interviews for The Dry Land

View All The Dry Land News

Critic Reviews for The Dry Land

It's impossible to watch the film and not realize that war is folly.

Williams draws upon countless earlier dramas without adding anything fresh or memorable to the discussion.

Writer-director Ryan Piers Williams seems to be diligently working through a checklist of returning-warrior-movie clichés.

Just another cost-of-war movie, you say? Yes, and that's exactly the point.

...[captures] the desolation of the high desert country and an excellent score by Dean Parks and a nice selection of pre-existing songs helps to place this story in a very specific time and place.

This typical covert censorship in war movies is so conventional and prevalent by now, that there's an actual office in existence called the US Army Entertainment Industry Liaison. Indeed, authenticity when it comes to locations and props, has its price.

A strong first film, and with a better-honed script, Williams should prove to be a director to watch.

A very familiar Stateside war drama -- narratively, the film just goads when it's convenient and shrinks when it suits its purposes, never feeling like an honest exploration of its characters' problems.

O'Nan's star making performance manages to hold things together even when the script threatens to tear them apart, while the emotional center of the picture rings with a moving truthfulness that can't help but hit close to home.

Audience Reviews for The Dry Land

Cast: Ryan O'Nan, America Ferrera, Wilmer Valderrama, Jason Ritter, Melissa Leo, Ethan Suplee, June Diane Raphael, Sasha Spielberg, Evan Jones, Ana Claudia Talancón, Benito Martinez, Barry Shabaka Henley, Diego Klattenhoff Director: Ryan Piers Williams Summary: Upon returning after his tour of duty, an American war vet (Ryan O'Nan) grapples with repressed memories from his experiences in Iraq and the everyday mundanities of his home life -- dealing with his isolation by embarking on a road trip with an Army buddy (Wilmer Valderrama). This intense drama, which also stars Jason Ritter and America Ferrera, takes a head-on approach to confronting the conflicted emotions of the modern warrior. My Thoughts: "It's an intense indie film about the effects of post-traumatic stress disorder. This movie is sad. The things these soldiers go through is unimaginable to most of us. Ryan O'Nan was the star of this, and he was believable and honest as James. Great supporting cast as well. There are some really heavy scenes. The ending especially. It was pretty intense and you really didn't know which way it was going to end. Just a good film. Some probably won't like it, but I hope more see it."

A powerful, if slightly overdone, look at the effect the gulf war can have on a returning veteran. This is relentless in its portrayal of a man whose war experiences prevent him from easily resuming his civilian life. America Ferrera is as beautiful as this viewer has seen her in the role of the wife who welcomes back the ticking time bomb that is her recently discharged husband, James (Ryan O'Nan). James fights his demons as best he knows how by drinking himself into a stupor and then lashing out at everyone around him. This felt real. It may not be based on any particular homecoming, but can certainly stand in for a lot of them. It is a message film and its message is important. If you are, or anyone you know is, having trouble re-integrating back into civilian life after seeing the horrors of war first hand, help is available. The returning hero needs to know that he does not have to face his demons alone. Not all PTSD cases end as well as this one did, but not all have to get to this point either.