Drums Along the Mohawk1939 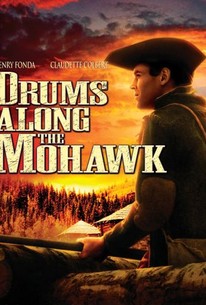 Drums Along the Mohawk Photos

John Ford directed this outdoor adventure set in the American Colonial period. Gilbert and Lana Martin (Henry Fonda and Claudette Colbert) are a young couple trying to make a home in New York State's Mohawk Valley, but repeated attacks by Indians drive them, along with other settlers in the valley, into a nearby fort, where they watch helplessly as the natives lay waste to their farms and cabins. A spinster with a large farm, Sarah McKlennar (Edna May Oliver), comes to their rescue when she hires Gilbert to work as a field hand and gives the Martins a place to stay. The rugged life of the farm and frontier doesn't always sit well with Lana, who was raised in wealthy and comfortable circumstances; in time she develops a thicker skin and learns to love their new life in the Mohawk Valley, especially after giving birth to their first son. Gilbert joins the militia, who must do battle both with the local Indian tribes and the British soldiers who are provoking them to battle. Gilbert returns wounded, and as he recuperates, a healthy crop rises in the fields, but their satisfaction is short lived when the Indians once again hit the warpath. 1939 was a stellar year for John Ford; along with this highly successful adventure tale, which was nominated for three Academy Awards, Ford also released the ground-breaking western Stagecoach.

Edna May Oliver
as Mrs. McKlennar

Critic Reviews for Drums Along the Mohawk

While Gone with the Wind and The Wizard of Oz are often regarded as the standard bearers of Technicolor photography, it's hard to fathom why Drums Along the Mohawk isn't mentioned right alongside them.

Duty leads to detachment, as is typical in Ford, and there are sterling examples here of resolute stoicism triumphing over hysteria.

It was Ford's first film in color and contains at least a handful of his most beautifully composed moments.

Sketchy and episodic, John Ford's patriotic Revolutionary War tale is not one of his best dramatic efforts, but as his first color feature, it boasts stunning Oscar-nominated pictorial values.

A lesser effort from Ford.

Audience Reviews for Drums Along the Mohawk

full of stereotypes, especially the description of indians as ape-like barbarians or christianity-converted dim-witts. i watched it just because i was curious how claudette colbert looks in color movies, and her costumes are sorta plain without the genius touch of paramout's travis banton, not doing colbert justice. henry fonda feels lacklusterly awkward with his un-becoming pig-tail. the reason i could be able to abscent-mindedly finish viewing it is its striking photography of inland wilderness, and how soothingly wide the blue sky is rendered along with limitlessly grand pastures, cliffy hills and the massive forests of tall pines(who knows what kind of tree is that..)..it manifests the aloof charm of primitive inland america despite the people in it weren't (portrayed) half as charming as its breath-taking landscapes. i would certainly watch it again to doze off while gazing at those striking views of celluloid nature.

Admittedly not Ford's best, not even his best in 1939 but Drums Along the Mohawk is still one of the better movies about the American Revolution and it contains some of Ford's most beautiful compositions.

It would have been emotionally uplifting at the time it was released, but it doesn't hold up today.

John Ford was responsible for many of the best westerns ever made, but this tedious frontier soap opera is certainly not one of them. Henry Fonda plays a frontier farmer caught up in the war of Independence with new wife Claudette Colbert, a pairing that is of course always watchable, but the story relies far too much on melodrama and frankly bores. Highlights include Fonda's hollow-eyed and shellshocked account of his first battle (which happens off-screen) and Edna May Oliver's cantankerous old broad, and it does pick up a little at the end during the seige of a fort, but it's far too little too late. Add to this the fact that the patriotic climax in which the newly created stars and stripes is raised to signify victory over the English is accompanied by the strains of "God save the King" and I couldn't help thinking that Ford must've been asleep at the wheel for this one...

Drums Along the Mohawk Quotes