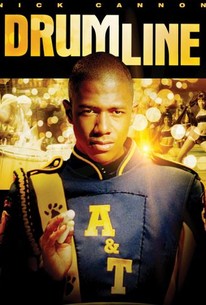 Drumline brings the world of "show-style" marching bands (popular at traditionally black, Southern colleges) to the big screen for the first time. The story, by Shawn Schepps, was inspired by the high school drumline experiences of executive producer/executive music producer Dallas Austin. Devon (Nick Cannon of Nickelodeon's The Nick Cannon Show) is a Harlem drummer who earns a full scholarship to the fictional Atlanta A&T University. There, his talent gets the attention of the school's embattled musical director, Dr. Lee (Orlando Jones), who puts his students' education and appreciation for musical tradition ahead of the marching band's popularity. Devon's brashly egotistical attitude doesn't endear him to Lee, whose slogan for the band is "One band, one sound," or to the drumline's disciplined captain, Sean (Leonard Roberts, late of TV's Buffy the Vampire Slayer). Devon has more success with the dance captain of the marching band, Laila (Zoe Saldana, who played a ballet dancer in Center Stage), a Southern belle who's won over by Devon's confidence. Sean feels threatened by Devon's talent, and his attitude, so when he learns that Devon can't read music, he uses the information to his advantage. With the band facing their archrival at a huge marching band competition, Dr. Lee has to decide whether to allow the brilliant drummer to perform, despite his attitude. Devon has to prove that he can show his skills while still being part of the team. Drumline was directed by Charles Stone III (Paid in Full), and features cameo appearances by musical artists Blu Cantrell and Petey Pablo. ~ Josh Ralske, Rovi

Miguel A. Gaetan
as Trey

Nicholas B. Thomas
as Pooh Bear

Petey Pablo
as Himself

Courtney James Stewart
as Student No. 1

AJ Calloway
as BET Announcer No. 1

Free
as BET Announcer No. 2

Stacey A. Fann
as Dancer

Jenear Wimbley
as Dancer
View All

Charles Stone III is a craftsman with brains and taste, an instinctive sense of where to put the camera and the discipline not to belabor scenes.

A superlative B movie -- funny, sexy, and rousing.

Offers little that's surprising or groundbreaking, but, because the script is smart enough not to insult us and to develop a group of interesting characters, the act of watching the film is an entertaining experience rather than a tedious exercise.

I love that we get into this world of marching bands. We barely see any football players -- we see the top of their helmets as they're getting out of the way.

[Has] an abundance of heart and humor.

Drumline sags a little toward the middle ... But the final showdown is a skills-'n'-style spectacular that feels like vibrant outtake from a highly choreographed civil war.

True bandos can see themselves in this exuberant, charismatic and lovingly accurate college marching-band movie that faked no flavor while staying in step with themes of instruction, character and respect.

It's a shame films of this ilk don't make it into theaters often.

A most unusual musical...Learning something from his subject, Stone gives the picture a snappy rhythm. [Blu-ray]

...though the movie does overstay its welcome, it's never boring and the majority of the music is infectiously catchy...

I had never planned on seeing this (for whatever reason), but I saw it a few years ago in a film and music class and forgot to review it on here. It's predictable, a little corny, but it's still a harmless and heartwarming tale of inspiration that makes you feel good afterwards. The music is good, and the performances are above average, so if you have some spare time and are bored, this is an okay time filler.

I was in the band in high school. I appreciate it's cuteness.

this doesnt deserve a review. either youre dumb enough to like this kind of movie or you arent