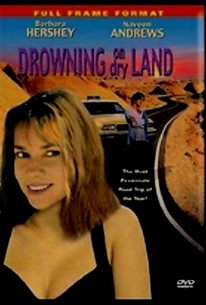 Barbara Hershey stars in this understated road movie. Kate (Hershey) flags down a cab one rainy night in Times Square and tells the British-Indian cabbie (Naveen Andrews) to drive until they get to the desert. Fleeing from an abusive relationship, she offers the driver $300 a day for a week. As they wend their way through America's wide expanse, these two lonely souls begin to talk and understand one another. Drowning on Dry Land was screened at the 1999 Flanders Film Festival.

There are no critic reviews yet for Drowning on Dry Land. Keep checking Rotten Tomatoes for updates!

There are no featured audience reviews yet. Click the link below to see what others say about Drowning on Dry Land!