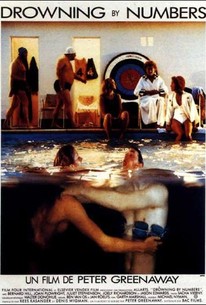 Peter Greenaway wrote and directed this typically surreal and iconoclastic black comedy. Three generations of women who share the same name -- 63-year-old Cissie Colpitts (Joan Plowright), her daughter Cissie Colpitts II (Juliet Stevenson), and granddaughter Cissie Colpitts III (Joely Richardson) -- have all discovered the same way of dealing with their marital problems. The senior Cissie has drowned her husband Jake (Bryan Pringle) in the bathtub, her daughter sent her spouse Hardy (Trevor Cooper) to a watery grave in the ocean, and the youngest Cissie sent her husband Bellamy (David Morrissey) down in a swimming pool. Needless to say, local coroner Henry Madgett (Barnard Hill) has some questions about this sudden rash of drownings among the Colpitts husbands, and again all three women respond in the same way: they promise to sleep with Henry in exchange for recording the deaths as accidental (though none of the Cissies make good on this promise). When the local gossip mill begins working overtime about this sudden rash of water-related deaths, Henry's teenage son Smut (Jason Edwards) comes to the aid of the Cissies and organizes a tug-of-war, with he and the Colpitts women on one side and the doubting townspeople on the other (and, of course, a river in the middle). Along the way, Greenaway often stops to contemplate his obsessions with literature, astronomy, and numbers. Drowning by Numbers was released in Europe in 1988, but didn't find its way to American screens until 1991, following the success of Greenaway's The Cook, the Thief, His Wife and Her Lover. ~ Mark Deming, Rovi

Arthur Spreckley
as Sid the Gravedigger

Vanni Corbellini
as The Hare

News & Interviews for Drowning by Numbers

View All Drowning by Numbers News

Critic Reviews for Drowning by Numbers

Here is a movie so personal and quirky that perhaps you will enjoy it more than I did, and I do not want to spoil your fun, since the movie is playful above everything else.

Drowning by Numbers is a surreal, satirical descent to the dark side of English gamesmanship. It is a brilliant black comedy.

It never seems safe to recommend [director Peter] Greenaway; only to say that, take it or leave it, he is a genius.

Its worth is drowned out by its obscurity and urge to make everything into an intellectual game.

Though not the most visceral of Greenaway's films, it is a textbook art film, meticulously organized, and requisite viewing for obsessive-compulsives.

Rumsey Taylor
Not Coming to a Theater Near You

Audience Reviews for Drowning by Numbers

If Kubrick's attention to visual composition as a photographer shows in his masterful films, then I can say just the same for Peter Greenaway, whose artistic sensibilities as a painter bleed through the constructions of his films' imagery. Take for example the scene here in "Drowning by Numbers" where a man, after drowning, lies peacefully in the pavement, with the camera looking at him from his feet. The scene, a moment of surprising serenity in a film that's filled with sexual and psychological oddities, religiously echoes its source inspiration, which is Andrea Mantegna's "The Lamentation over the Dead Christ". Such moments, for me, are what make Peter Greenaway's films more endearing to the audience, despite the fact they are often times filled with macabre violence and are adamant in its departure from conventional storytelling. But as what Greenaway has once said, he is drawn towards a form of cinema that is truly non-narrative, and here in "Drowning by Numbers", a truly challenging film that plays a macabre numbers game on sex and death, it is very much evident. Suggestive of the film's title, it is indeed, on surface level, about numbers and about drowning. But with Peter Greenaway, a filmmaker who, a year later, was able to create a cannibalistic parable in the form of "The Cook, the Thief, His Wife and Her Lover" and subtly analogize it with the evils of Thatcherism, the thematic assumptions that's represented by the film's "Drowning by Numbers" title is just too deceptively simple and misleading. But of course, the film sure has a semblance of a plot: A harmless-looking mother (Joan Plowright) and her two daughters (Juliet Stevenson and Joely Richardson), all of which are named Cissie, have this strange, almost fetishistic inclination of drowning their respective husbands and lovers. Along then comes Madgett (Bernard Hill), the local coroner who, because of his belief that the women will repay him with rich sexual favors, decides to help them in covering up their murderous deeds via falsely declared causes of deaths (heart attack and death by misadventure seem to be his favorites). Again, the story seems so deceptively light and, in true noir tradition, formulaic. But let's again be reminded that Peter Greenaway is on the helm, so expect him to play cinema, a form that he has long believed to have died many years ago, into his utmost advantage and in complete conformity to his one-of-a-kind vision. With numbers 1 to 100 appearing randomly (but chronologically) all throughout the film, be it in the shirts of quirky joggers or tattooed into the skins of forlorn cows, Greenaway is, in a way, making his audience aware of the uncomfortable fact that death is always around the corner and that it is not a scythe-holding, black-hooded man that may bring it to us but mere numerals. This, from where I look at it, stays true to Greenaway's fear that "The pretence that numbers are not the humble creation of man, but are the exacting language of the Universe and therefore possess the secret of all things, is comforting, terrifying and mesmeric." With his visual and thematic approach for this film, his apprehensive look at numbers surely and clearly shows, all while some calmly fatal horseplay of sex and murder proceeds in the foreground, not to mention some consistent feminist undertones that are reminiscent of femme fatale films of years past. Interesting enough, what makes "Drowning by Numbers" such a resonant art film is not its utter thematic seriousness but its morbid playfulness that can be aptly mistaken as a form of harsh humor. Specifically, I'm talking about the film's unique integration of bizarre games (invented specifically for the film), all of which are explained in aching detail (by Madgett's son Smut, played by Jason Edwards), into the story. Granted, it may or may not be truly integral to the whole film, but then again, that's one of those artistic liberties that separate a true visionary like Greenaway from all the others. Adamant of not taking the easy way out, he was able to punctuate the film's claim that 'death' can be liken to a game in a very exciting and fresh manner (partnered with Michael Nyman's classical scoring). Also, "Drowning by Numbers'" use of enforced repetition, which, for some, is quite discomforting in the context of storytelling, is fitting for the film's wholly playful nature. Some even argue that the film's story could have been easily told in 1 hour, but keep in mind that Peter Greenaway, essentially, is not a narrative filmmaker so the joke's on whoever said that. After all, Greenaway clings on to the belief that every medium has to undergo a kind of redevelopment and evolution. "Drowning by Numbers", by deconstructing the traditional means of telling a story, is a textbook example of such. As a parting quote, Peter Greenaway has once stated that "We do have some ability to manipulate sex nowadays. We have no ability, and never will have, to manipulate death." Surely, that may be the case for our final hurrahs, but such is not the same case for film as an art form because it is independently powerful in its own right, and some form of manipulation, so as to attain a higher form of message transmission, emotional evocation and expression, wouldn't really hurt. Greenaway is quite aware of that fact.