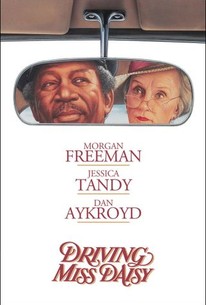 Based on the Pulitzer Prize-winning play by Alfred Uhry, Driving Miss Daisy affectionately covers the 25-year relationship between a wealthy, strong-willed Southern matron (Jessica Tandy) and her equally indomitable Black chauffeur, Hoke (Morgan Freeman). Both employer and employee are outsiders, Hoke because of the color of his skin, Miss Daisy because she is Jewish in a WASP-dominated society. At the same time, Hoke cannot fathom Miss Daisy's cloistered inability to grasp the social changes that are sweeping the South in the 1960s. Nor can Miss Daisy understand why Hoke's "people" are so indignant. It is only when Hoke is retired and Miss Daisy is confined to a home for the elderly that the two fully realize that they've been friends and kindred spirits all along. The supporting cast includes Esther Rolle as Miss Daisy's housekeeper and Dan Aykroyd as Miss Daisy's son, Boolie (reportedly, playwright Uhry based the character upon himself). Driving Miss Daisy won Academy Awards for Best Picture, Best Actress (Jessica Tandy), Best Screenplay (Uhry), and Best Makeup (Manlio Rochetti). ~ Hal Erickson, Rovi

Indra A. Thomas
as Soloist

Ashley Josey
as Trooper #2
View All

This is a chamber movie with the courage to stay small and resonant.

Freeman is note-perfect with Hoke's dignified warmth, and Tandy, whose every moment on screen is an acting lesson, turns in what by far is the most hauntingly elegant performance of the year.

Every one of these dramatic maelstroms manages to appear fresh because Freeman and Tandy somehow manage to come up with new approaches, meting out complementary aspects of their characters.

The movie never resorts to sentimentality. It has a dry wit as well as genuine warmth. Best of all it is the perfect showcase for two deserving actors -- Jessica Tandy and Morgan Freeman.

One of the year's best films, a rarity in that a play has been successfully transferred to film without having the dialogue seem "written."

Driving Miss Daisy spans a quarter-century in the intricate relationship of a Southern dowager and her chauffeur, and it is a movie that invites you to appreciate the passage of time in more than one way.

It romanticizes, rather than challenges the racial power politics it presents.

For all the artistry in the background and behind the camera, Driving Miss Daisy is ultimately an acting showcase. And its stars are ultimately responsible for the delight it creates.

A warm and tender, human story. [Full Review in Spanish]

All the good in this film ends up being shipwrecked by a cloying, but predictable, ending. [Full Review in Spanish]

Fine acting, subtle direction, good writing, in fact, a film for everyone to appreciate and enjoy.

David Stratton
At the Movies (Australia)
View All Critic Reviews (64)

Why this movie won so many Oscars is something that escapes me, given its annoying and poorly-paced narrative that forces us to endure an unbearable old lady and feels tremendously episodic trying to span 25 years with skips in time that are never fluid.

Driving Miss Daisy, I thought was a pretty good film, but was nowhere near the grand scale it has been described as. I'm not saying that it's a bad affair, but I feel it's a bit overrated as well. Morgan Freeman has made far better films than this, but here he delivers a very good performance, but compared to other pictures he's done, this one just doesn't stand out. The film is good for what it is, but I don't feel that it's a classic either. The story is good, charming and fun, and it boasts some engaging performances, but at times you feel that the film could have been much more as well. The film feels like it tries too hard at grabbing your attention and it should be effortless in doing so. Miss Daisy is good, but I simply didn't see how great it is. I personally feel there are far better films out there. Luckily the film is entertaining for what it is, but I would call this film a film that only warrants one viewing because I feel that it's necessarily a film that doesn't need to be seen time and time again. Driving Miss Daisy is entertaining and good for what it is, but it doesn't stand out as powerful picture and a film classic by any means. The cast do a fine job in their roles, but I felt that the story could have been polished a bit, and it should have had the potential of being a truly great film. The film is unfortunately a prime example of typical Oscar bate, only designed to appeal to the Academy, but when you actually watch it, you wonder why this film is so good. I mean this picture is entertaining, well acted and good, but it's nowhere near as good as everyone has claimed it to be.

This is an undeniably sweet movie, that you cant help but enjoy, i love morgan freemans laugh in this movie its so funny, although at times the uneducated character can become a bit annoying, that said it is a sweet, amusing movie, its debateable whether it is solely deserving of the awards although the acting is superb the movie is nothing spectacular to make you wow i love that movie its amazing because it quite simply isnt. I did enjoy and is worth the watch! sweet drama comedy.

Morgan Freeman is as brilliant as always, as Hoke, a chauffeur for Miss Daisy, as her everyday ventures are very eventful. He helps her through her life, and we get many side plots about life along the way. Most of the sets represent perfectly, what is the time period it is set in. I did find some of the conversations between Hoke and Miss Daisy to be a little annoying a frustrating at times, but that is mostly due to the fact that Hoke's education is less than average. Through some terrific acting by a wonderful cast, a script that represents true life emotions with perfection, and a story that is sweet enough to call great, "Driving Miss Daisy" is a great film for many reasons. It is not the masterpiece like some people hope it to be or say it is, but in the end, that doesn't matter, you just smile. "Driving Miss Daisy" is blissful!