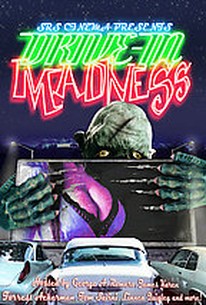 At the peak of their popularity, there were nearly seven thousand drive-in movie theaters operating in the United States, where families could see a show in the great outdoors complete with popcorn and teenagers could park for a few hours without being bothered. While many drive-ins showed traditional Hollywood fare, the majority tended to screen exploitation movies -- horror, science fiction, biker flicks, soft-core sex -- especially in the Sixties and Seventies as they primarily became a center for young people. Rising land values and a decline in attendance has caused most drive-in theaters to close, but if they're largely gone they're not forgotten, and this documentary pays homage both to America's drive-ins and the sort of movies that often played there. Drive-In Madness includes trailers for dozens of vintage exploitation films as well as classic snack shop commercials and intermission "countdowns." In addition, a number of noted figures in exploitation film history talk about their work and their place in drive-in history; interview subjects include scream queens Linnea Quigley and Bobbie Bresee, Night of the Living Dead director George A. Romero, gore effects wiz Tom Savini, veteran distributor Sam Sherman, and Famous Monsters of Filmland editor and horror movie expert Forrest J. Ackerman.

George A. Romero
as Host

Russell Streiner
as Host
View All

There are no critic reviews yet for Drive-In Madness. Keep checking Rotten Tomatoes for updates!

There are no featured reviews for Drive-In Madness at this time.