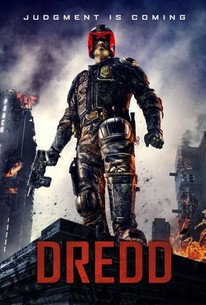 The future America is an irradiated waste land. On its East Coast, running from Boston to Washington DC, lies Mega City One- a vast, violent metropolis where criminals rule the chaotic streets. The only force of order lies with the urban cops called "Judges" who possess the combined powers of judge, jury and instant executioner. Known and feared throughout the city, Dredd (Karl Urban) is the ultimate Judge, challenged with ridding the city of its latest scourge - a dangerous drug epidemic that has users of "Slo-Mo" experiencing reality at a fraction of its normal speed. -- (C) Lionsgate

Shoki Mokgapa
as Woman with Child

Yohan Chun
as Girl in Window

Eden Knowles
as Girl in Window

Daniel Hadebe
as Judge at Entrance

Francis Chouler
as Judge at Entrance

14 Under-the-Radar Films Featuring Game of Thrones Stars
Who Should The Aliens Fight Next?
Comic Book Movies You Can Watch Online

While not for the squeamish, Dredd 3D is an effectively gritty B movie accentuated by stylish visuals and irreverent humor.

We have seen this future. And not only does it not work - it no longer even surprises.

Proves a surprisingly unimaginative cops vs. drug lord story, complete with the weathered veteran forced to take a rookie under his wing.

This, finally, is the Dredd movie comic book readers have been anticipating.

Smartly cast and with a sharp team behind the scenes, there is no good reason why "Dredd 3D" is such a clunk-headed action picture.

The result is quite trippy.

The Judge has spoken. A directed verdict for First Degree Action-Packed Thrills!! Dredd 3D is a "dreddfully" delicious delight.

Surprisingly, this flashy facelift happens to be one of the best action films to be made in quite some time, its gritty adult humor and narrative aptitude recalling the best works of genre stalwarts like Verhoeven and Carpenter.

A blood soaked cocktail with a stylistic kicker. I found it to be a lot of fun.

Clocking in at a pacey 96 minutes, Dredd 3D will satisfy fans as well as serve as a great introduction for newcomers to the character.

It has just enough ambition to make a few modest statements about the nature of power and judgment without sounding pompous and its action is done well.

Take two for this adaptation of the classic British dystopian sci-fi comic book character. Not that I disliked the first Stallone attempt, I think that has been given a harsh time personally. Sure it wasn't adult enough and had Rob Schneider in it but they captured the look and feel I thought. I liked the plot idea for this film, the two Judges trapped within this enormous tower block and having to take down all the perps. Not exactly original but a good recipe for action, a slight nudge towards 'Die Hard' perhaps, mixed with 'The Raid'. Its also neat that 'Mega City One' has loads of these massive towers, so theoretically each tower may have the same criminal problem as this one. This gives you an idea of how big/vast the cities criminal problems are and the genesis for lots of stories within this universe, it gives a nice depth to this universe too. First thoughts for this new film and I was slightly disappointed to be honest. As the movie opens up and we get narration about the worlds current climate I felt myself thinking this world doesn't actually look very futuristic. Now I didn't expect robots, laser guns and other typical sci-fi cheese but I guess I did expect a kind of...without trying to sound too cliched, 'Blade Runner' type world/environment. 'Mega City One' didn't really look very eye blisteringly cool, just looked like a massive urban sprawl, realistic yes, exciting no, perhaps a bit too realistic?. I liked that they tried to keep things more grounded and in a possible near future which isn't too far fetched (I'm guessing), but it didn't really feel overly futuristic. This also goes for all the druggies and bad guys holed up in the massive tower block that Dredd takes on. Most of them dressed and looked like your average hoodie youths I see on the street today, bright coloured t-shirts, polo shirts, tracksuits, gold chains etc...Again I realize its a real take and we don't want them dressed in luminous spandex, but I just expected a bit more I suppose. As for Dredd and his partner its all good, I loved the way they brought Dredd's suit down to earth, made it look functional and yet kept it recogniseable for the fans. Urban was also top notch as Dredd with his gravely voice (not as stupid as Bale's 'Batman', about on par with Eastwood) and trademark sneer, my only criticism would be he didn't look very big. I was impressed with Thirlby as Anderson and the way her psychic abilities were handled, could so easily of been corny. Thirlby did a really good job as the wet behind the ears rookie, she conveyed that nicely whilst also being really cute at the same time. As her confidence grows surrounded by violence so does her appeal to you the viewer. The main head villain is played by a woman here which is a nice turn but ultimately ends being rather mundane. Lena Headey plays the role well and she does comes across as a real bitch that you just wanna see get blown away, but she never really does much apart from one scene. Her comeuppance is also pretty weak and slightly anti climatic. The film is as violent as I expected, it goes from being a bit too ridiculous with skinning people (bit odd and sick that), to gut splitting, face piercing, head shattering shoot outs. Gotta love that gun Dredd uses eh, its right up there with 'Robocop's' hand cannon. I also liked that the film looms towards a Verhoeven style for gunning people down but I gotta say I didn't like all the slow motion. Yes I know that's the whole point with this drug but I just hate that kind of crap, I just wanna see the action, the slow motion just stops it dead, very frustrating. Most definitely a success with this reboot mainly because it was done for the adult audience, I wonder if Hollywood has clicked on that yet?. Its no 'Die Hard' beater and its not the best action film I've seen recently but its a solid gritty film. Would like to see more futuristic shine in any sequel though, just a touch.

Whereas the previous Stallone effort chose to sneer at the title character's adventure, here it is fondly embraced, and what a difference perspective makes indeed. Action and wanton mayhem for aficionados, thank you. The use of slo-mo only sweetens the pot. Woe that Lena Headey was not given more to do. She was eating the screen.

Unlike Stallone's comic book adaptation this one stays somewhat close to the source material in tone and attitude. Urban works great as the judge who never takes off his helmet and doesn't speak more than he has to. The violence is really graphic but at least pretty inventive. The limited place for the plot of a single skyscraper may have worked for Die Hard, here it feels as if we're seeing the same corridors over and over again. That makes the film somewhat repetitive, but overall you gotta applaud the creators for taking such a grim and "devil may care" route. Maybe a sequel could open up the hidden potential.

Taking more from the original comic than the 1995 adaptation, "Dredd" is simple, bloody, gory, gross, action packed, and thrilling. This new Dredd (Urban) is played as a straw man Clint Eastwood, who is vetting a young psychic (Thirlby) for active duty. Their interplay makes for an interesting team, and adds tension to an already thrilling plot. Lena Headey was an sound choice of villain, and she remains threatening throughout, especially when she calls for violence against her own people. Most of the film is set within the confines of a single housing project in a poverty stricken area of a futuristic world. Designer drugs come into play, there's economic and social disparity, and much of the film shows how big this world is without being explicit in details. It's paced rather well, and there's a lot of potential for a sequel. This truly delivers where other action films are happy to stand on the sidelines.