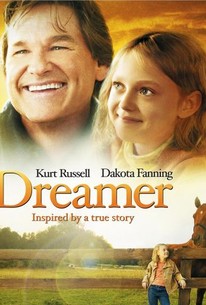 Critics Consensus: Though formulaic, this horse story's saving grace is its strong performances.

Critics Consensus: Though formulaic, this horse story's saving grace is its strong performances.

Critic Consensus: Though formulaic, this horse story's saving grace is its strong performances.

Ben Crane was once a great horseman, whose gifts as a trainer were now being wasted on making other men's fortunes. Sonya was a great horse whose promising future on the racetrack was suddenly cut short by a career-ending broken leg. Considered as good as dead to her owner, who also happens to be Ben's boss, Sonya is given to Ben as severance pay, along with his walking papers. Now, it will take the unwavering faith and determination of Ben's young daughter, Cale, to bring these two damaged souls together in a quest for a seemingly impossible goal: to win the Breeders' Cup Classic.

News & Interviews for Dreamer: Inspired by a True Story

View All Dreamer: Inspired by a True Story News

Critic Reviews for Dreamer: Inspired by a True Story

Despite thoroughbred work from Dakota Fanning, by the time the movie hits the final furlong it's only good for the glue factory.

Lovely family film, which has a way of resonating in one's imagination for days.

As a sports drama -- a genre that's gotten entirely too much play lately -- Dreamer is singularly unexciting.

It's to Fanning's and Russell's credit, and the filmmakers', that the formula never gets the better of the film.

All the characters are familiar, the story is familiar, but it is well-constructed and the actors do a good job with the material.

Dreamer is loaded with enough clichés and formulas to choke a horse. But truly, it works.

It is a movie that will captivate children, yes, but it will also capture the hearts of the grown-ups, too.

Screenwriting manuals have taught us that every film is (or should be) a Hero's Journey, but writer-director John Gatins takes that gospel so literally it's hard to know whether to admire his purity or marvel at his lack of imagination.

The charismatic Fanning proves she is the best child actress in decades.

Audience Reviews for Dreamer: Inspired by a True Story

Very good movie. I watched this movie with my bff and I loved it!!! :)