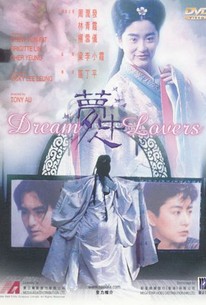 Noted art director Tony Au Ding-ping helms this acclaimed romantic fantasy featuring Chow Yun-fat and Brigitte Lin Ching-hsia. Sony Yu (Chow) is a famous orchestra conductor who recently suffers from a series of bizarre visions of a beautiful woman and a Qin dynasty era terracotta statue. When he ventures to a exhibit of such ancient relics, he meets Cheung Yuet-heung (Lin), who not only looks exactly like the woman in his dreams, but also suffers from similarly intense but decidedly more violent visions -- in one Yu gets garroted by the imperial guard and others are simply too gory to be divulged. Soon the two consult with a medium who takes them that they are the reincarnation of a pair of lovers murdered some 2000 years previous. Yu's girlfriend Wah-lei realizes that she has no part in this relationship and graciously bows out.

There are no critic reviews yet for Dream Lovers. Keep checking Rotten Tomatoes for updates!

There are no featured reviews for Dream Lovers at this time.