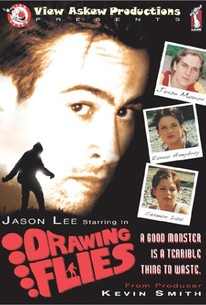 Shot entirely in black and white and produced by the team of Kevin Smith and Scott Mosier, the duo behind Clerks (1994) and Mallrats (1995), this low-budget, independent Canadian production failed to stir up much excitement on the festival circuit. Co-writers, editors, and directors Matt Gissing and Malcolm Ingraham created the tale of a group of Generation X "slacker" types from the Great White North. Bored by their existence and running out of funds provided on the public dole, Ethan (Ethan Suplee), Meg (Renee Humphrey), Cassidy (Carmen Lee), Az (Jason Mewes), and Donner (Jason Lee) decide to repair to the forest in search of the legendary cryptozoological specimen known alternately as Bigfoot or Sasquatch. They're equally sure that they'll attain the peace of mind afforded by escaping society, but of course, their sabbatical is not quite what they expected. Joey Lauren Adams and Canadian comedian Bruce McDonald appear, as does Smith, in a cameo appearance as his recurring Silent Bob character. ~ Karl Williams, Rovi

There are no featured audience reviews yet. Click the link below to see what others say about Drawing Flies!