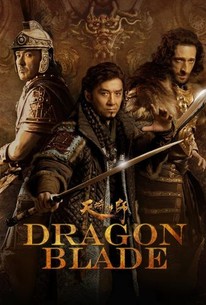 Critics Consensus: Dragon Blade is beautifully staged and choreographed, but between the battles, its talented cast is overwhelmed by a dull story and choppy editing.

Critics Consensus: Dragon Blade is beautifully staged and choreographed, but between the battles, its talented cast is overwhelmed by a dull story and choppy editing.

Critic Consensus: Dragon Blade is beautifully staged and choreographed, but between the battles, its talented cast is overwhelmed by a dull story and choppy editing.

One of the most expensive films ever produced in China, the historical action epic Dragon Blade takes place during the Han Dynasty. The story centers on the commander of the Protection Squad of the Western Regions (Jackie Chan), who joins forces with Roman general Lucius (John Cusack) to protect China's sovereignty as power-crazed Tiberius (Adrien Brody) seeks to defeat Lucius once and for all. ~ Jason Buchanan, Rovi

Jackie Chan
as Huo An

Sharni Vinson
as The Queen

Tomer Oz
as Huo An General

David Peck
as Agrippa
View All

The Transporter Refueled Is a Lemon

There are nice moments, but this is pure bombast, and Chan's natural action flair is not given free rein.

For those who ever wondered what it would be like to see John Cusack and Jackie Chan engage in a swordfight (both of you), here is "Dragon Blade."

Just about everyone seems to get slashed, carved up or skewered, and vengeance rains down upon all. Except, of course, the one villain who truly deserved it. The filmmaker.

It's kind of a mess. That more than 20 minutes have been trimmed for the stateside release may have hurt the film's coherence, but viewers will be thankful for the shorter sit.

Dragon Blade" is a solidly constructed epic that, despite its many battle scenes, has a strong message of pacifism and unity.

The narrative is notably bizarre, with a smorgasbord of never-ending tribulations and lingering speeches - however, brush that aside for a film that relies on the spirit and merits of its actors and crew.

Andrew Daley
One Room With A View

Chan demonstrates his perennial physicality, but it is hard to tell why Cusack and Brody became involved in a project where their acting talents are so forcibly stifled by an underdeveloped, porous script that is riddled with clichés.

[Dragon Blade is] a compact epic that espouses peace and interracial/international harmony while engaging in enormous amounts of blade-wielding, butt-kicking and blowing stuff up. It's kind of wonderful in an insane way.

Dragon Blade feels like a dispiriting way for even seasoned bargain-bin trawlers to be seeing in the New Year.

Dragon Blade offers a daftly entertaining throwback to historical epics of the 1960s.

There are no featured audience reviews yet. Click the link below to see what others say about Dragon Blade (Tian jiang xiong shi)!