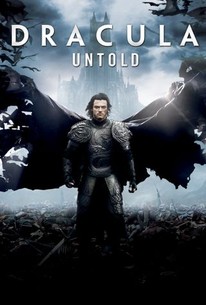 Critics Consensus: Neither awful enough to suck nor sharp enough to bite, Dracula Untold misses the point of its iconic character's deathless appeal.

Critics Consensus: Neither awful enough to suck nor sharp enough to bite, Dracula Untold misses the point of its iconic character's deathless appeal.

Critic Consensus: Neither awful enough to suck nor sharp enough to bite, Dracula Untold misses the point of its iconic character's deathless appeal.

[Evans] carries Untold by admirably fulfilling the two essential functions of a period-movie hero: to enunciate comic-book dialogue with Shakespearean authority and to look great with his shirt off.

Most of the time, I found myself feeling like I was waiting for a turn with the gaming controls.

If you can selectively ignore this litany of inanity, you may find some substantial earthy pleasures in "Dracula Untold."

The idea is to humanize one of the most fearful monsters in the Western crypt. But Dracula Untold goes way overboard, past domestication and into canonization.

A generic vampire tale in the Underworld vein that comes closer to the infamous Van Helsing than a memorable re-interpretation of a legendary monster.

The movie is the latest multiplex filler to co-opt a classic tale only to drown it in computer-generated murk. Even the title has the ring of something created by committee.

I love a good antihero as much as the next critic, but Dracula's just not hero material. Even when he's awkwardly crammed into a heroic role, he doesn't behave heroically. He behaves like Vlad The Impaler, and we're supposed to cheer his brutality.

An origin story that is fresh in ideology, painting a different and previously unseen picture of Vlad, a very human portrait of a man forced to face his own mortality and humanity out of love, leading him to his ultimate destiny.

Neither Luke Evans nor his action star physique has the prowess to make Dracula Untold anything more than a series of pretty but empty headed action sequences.

Like a mix between Braveheart and a literal bat-man, Transylvania's favorite son has been reformatted and given a plot full of the worst moments from The Lord of the Rings series.

The film that has the potential to soar is thwarted by its saccharine moments and a lack of directorial confidence.

Ellena Zellhuber-McMillan
One Room With A View

Sometimes, what a film needs is a good script, and this proves that some stories are probably best left untold.

Dracula's retold origin story, with very few ties to the historical character or Stoker's sources, as an action-packed medieval adventure with a few horror aspects. The special effects are great and there are a few (visually) outstanding scenes, with its short running time, the film could hardly bore you if it tried. That being said, it also feels pretty shallow, staying one rather predictable paths just aiming for the sequel that may never come in the end. There is some unused potential here, one has to wonder why the film didn't take the time to breathe and add some depth to its characters and story.

The old monster was not always a monster, was not always old, and this reboot, seen through what seems like teen angst-y goggles, takes a look at that possibility. And so the decisions that bring the monster out are inspected and verified, and not badly as well. In the middle, a dark and mysterious supernatural element, a power, and one that seduces ultimately, that begs redress, hides in the darkness of a cave in the wilderness. Many critics didn't like this. I think they're wrong is all. This is okay, overwrought in places, maybe, but nice as the kicker of a possible new series.

As a horror flick, this Dracula is toothless, earning two stars at best. The strange absence of blood from a vampire/war film renders the experience anemic. I also don't get the point of making a film that portrays pre-vampire Dracula as sympathetic and heroic -- and I certainly don't understand why a plot point would focus on Dracula's apparent ability to control his blood-lust or to sacrifice vampiric interests in favor of human ones -- that is, unless the studio hoped to turn this "Dracula" into a hero vampire in the mold of Wesley Snipe's Blade. Despite these problems, approaching the film as an action film, it's actually quite enjoyable. The costumes and CGI are very good, and Evans and Dance deliverer very good performances (for an action/horror film), although the same cannot be said for Gadon and Murtagh, both of whom are merely adequate. There are some script problems, of course, which border on the absurd. For example, Dracula will single-handedly take on 1000 attacking soldiers, who all apparently stop their castle attack/charge to gather 'round and watch themselves be picked off one by one -- and during this process (which must have been over an hour or so, given Dracula's slaughter pace), none of the soldiers defending the castle seem to notice, because they only come charging out the gates (looking baffled) after Dracula has slain the entire attacking army! If you can put up with silly writing, you aren't in the mood for a horror film, and you just want a mindless action movie, I would recommend this film. But now the true test: if there's a sequel made, I'll buy a ticket.