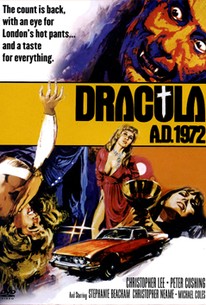 Hammer Studios attempted to inject new blood into their Dracula series by setting their next installment in ultra-mod '70s London, where the Count is revived after 100 years by a gang of devil-worshipping swingers led by the not-so-cleverly-named Johnny Alucard (Christopher Neame), and later joined by Jessica (Stephanie Beacham), granddaughter of the legendary vampire hunter Dr. Van Helsing (Peter Cushing, returning to the role after more than a decade). After the group manages to resurrect the Count, he sets about the task of destroying the house of Van Helsing once and forever, leading to a battle in a de-sanctified cathedral. Despite some well-staged scenes, a thrilling prologue (involving a tense battle between Lee and Cushing aboard a runaway coach) and the presence of the stunning Caroline Munro, this is definitely one of the weaker entries in the series, and the script gives Lee very little to do with the hissing, red-eyed villain. Lee may have been bored with reprising the role altogether, as he would only return for one more sequel, The Satanic Rites of Dracula. ~ Cavett Binion, Rovi

Marsha A. Hunt
as Gaynor

Stoneground
as Rock Group
View All

Dracula A.D. 1972 isn't a great movie. But it is an undeniable hoot to watch especially if, like the Count, "you've got an eye for London's hot pants... " And who doesn't, really?

This isn't a terrific rationale for another horror flick but, given Miss Beacham's ability to heave, and her bosom to heave with, it will have to do.

The disappointment involving Dracula A.D. 1972 is that the title character never ventures outside his hiding ground, missing a rich opportunity for some interesting juxtapositions.

Rather awful, this is one of the sadder entries in the Dracula canon.

A modern version of Dracula that is the weakest in the Lee-Hammer series.

A sad way to watch a formerly great series enter its death throes.

Actually a pretty good vampire movie for a movie with the year in the title. Lee is brilliant as Dracula as usual, even if the rest of the cast is bad. It's not great, but I enjoyed it.

If nothing else, Dracula A.D. 1972 will prove that Hammer was on its way out and its best days were behind it. Unfortunately, this movie isn't much more than gimmicky fodder for some MST3K-styled razzing. Christopher Lee is barely passable despite the fact that he helped define the role of Dracula and Peter Cushing almost seems age inappropriate in his role once he goes into vampire hunting mode. There's plenty of foxiness to drool over but if these guys are supposed to be teenagers I'm supposed to be Jesus' understudy. The blatantly modern setting (which I understand is supposed to be the point) makes Dracula A.D. 1972 not feel like a Hammer movie. Some effects were neat, but since when the hell can you kill a vampire with regular, tap, non-holy water?

I don't know what all the fuss is about here. People seem to really loathe this entry, but I really dig this update of the Hammer Dracula series and I think it was about time some fresh ideas were thrown in there. Yeah, there's that cheesy 70's jazz soundtrack, but it adds a lot of charm and sets it beautifully in the era in which it was produced. I particularly enjoyed a lot of the camera work and angles by Dick Bush. I'm actually shocked it got made at all, to be honest. It's so over-the-top and modernized, I can't believe that Cushing and Lee had anything to do with it. Though, in those days, these men were working actors, so I guess I shouldn't be too surprised. Not that that detracts from the film - it's just a marvelous and crazy film that most people hate but I particularly enjoyed it.

een reading the other comments of this film For some reason over the years various film critics and horror film book authors have been unjustly mean to this film. I mean you have Peter and Christopher together which is always a good start. A couple of smashing birds ( note the 70's lingo ) in Stephanie Beacham and Marsha Hunt and an absolute corker in the very sexy Caroline Munro ( who of course also advertised Lamb's Navy Rum , did a Bond Movie and perhaps the pinnacle of her career appeared as one of the hostesses with Ted Rogers and Dusty Bin on 3 2 1 ) I love the music too all very 70's. Christopher Neame's death scene was superb as was the final fight between Pete and Chris ( with that crazy 70's music once again ) is very well staged. Although Mr. Cushing looks as he's going to collapse going up and down those spiral steps. The hilarious 70's costumes on the blokes look like they might have once belonged to Richard O'Sullivan in Man About the House. One chap spends the whole film dressed as some kind of 'kinky' monk. The crazy 70's lingo is very funny and the group at the beginning at the party 'Stoneground ' well I'm just lost for words. All in all I think this film is an absolute corker. If you haven't seen ignore the negative comments sit down and enjoy it. I think it's a corker.