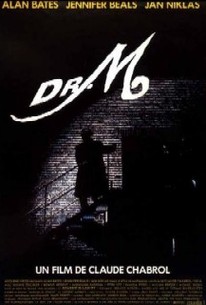 Noted French director Claude Chabrol helmed this oddity, a remake of German director Fritz Lang's 1922 classic Dr. Mabuse. The film features an all-star international cast as it tells the futuristic horror story of a bizarre epidemic which has swept West Berlin leaving a grim trail of grisly suicides. Meanwhile, the media broadcasts weird, highly suggestive propaganda. The authorities are appalled by all the bloodshed, but only one lone cop suspects that the "suicides" are really the work of a demented criminal mastermind. The film is also known as Dr. M. ~ Sandra Brennan, Rovi

William Berger
as Penck
View All

There are no critic reviews yet for Dr. M. Keep checking Rotten Tomatoes for updates!

There are no featured reviews for Dr. M at this time.