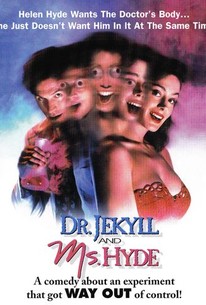 Robert Louis Stevenson's classic tale of a man whose scientific meddling has unexpected results gets a cross-gender update in this comedy. Richard Jacks (Tim Daly) is a research scientist trying to work his way up the ladder at a major perfume company when he inherits the notebooks of his great-grandfather, Dr. Henry Jekyll. Fascinated by Jekyll's ideas about the duality of man, Jacks starts performing experiments to refine his potion that would isolate man's good and evil natures. However, Richard's version has a very different result than the old Jekyll formula, instead of turning him into a snarling beast, the drug transforms him into Helen Hyde (Sean Young), a beautiful and powerfully sexy woman with a slight case of nymphomania. Jacks figures that a good looking woman willing to sleep with nearly anyone should have no trouble rising to a position of power within the company, so his alter-ego Helen may be his ticket to a room at the top. But this plan may require a bit of explaining to Jacks' girlfriend, Sarah (Lysette Anthony). The supporting cast includes Polly Bergen, Jeremy Piven, and Harvey Fierstein, who is so awestruck by Helen Hyde's allure that he's rendered heterosexual by the experience.

Robert Wuhl
as Man With Lighter

Herb Goldstein
as Nose No. 1

Michael Rudder
as Nose No. 2

Susan Glover
as Nose No. 3

There are no critic reviews yet for Dr. Jekyll and Ms. Hyde. Keep checking Rotten Tomatoes for updates!

I remember thinking WTF when I saw this on cable years ago. Not a terrific flick.

Hilarious! A comedy with lots of laughter!